Aztecs struggle to generate offense in blowout loss to Utah 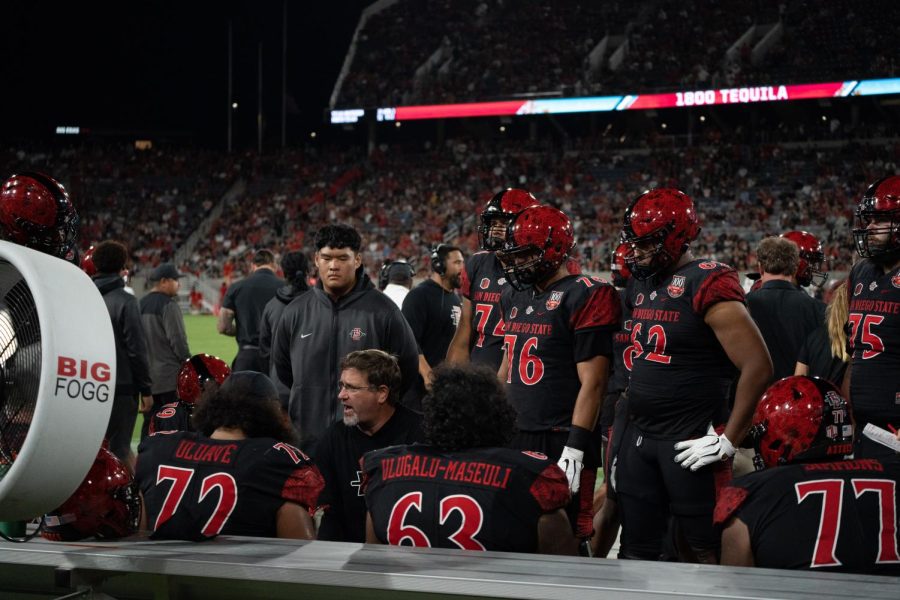 The Aztec coaching staff meets with the offensive line during a game versus Idaho State on Sept. 10, 2022.

Aztecs senior quarterback Braxton Burmeister exited the game late in the first quarter after taking a poke to the eye from a Utah defender. After being examined by doctors in the medical tent, Burmeister remained on the sidelines for the rest of the game.

“Braxton got a thumb in the eye,” Head Coach Brady Hoke said. “It was just black for him at one time and blurred for most of the game. He couldn’t see.”

The injury could not have come at a worse time for the Aztecs, as they were locked into a heated defensive battle with the heavily favored Utes and the game knotted at 0-0.

Hoke initially inserted redshirt freshman backup Will Haskell after the injury to Burmeister, but pulled Haskell in favor of true freshman Kyle Crum, after only one series.

“Kyle and Will had split reps during last week and we felt that at that time, and talking to Jeff (Hecklinski-Offensive Coordinator) that Kyle would give us the best opportunity and that’s kind of where it’s at,” Coach Hoke said.

Crum, whose only previous collegiate playing time was one snap in the loss to Arizona, simply did not have the experience to navigate the Aztec offense effectively. The offensive game plan looked to be a stripped down version of the offense typically run by Burmeister, and Utah keyed in immediately. With Aztec running backs facing stacked boxes and Utah Head Coach Kyle Whittingham’s defense daring Crum to throw, SDSU’s offense was neutralized, consistently failing to convert on third down.

With the Aztecs offense in a standstill, Utah quarterback Cameron Rising found his footing and threw two touchdown passes in the second quarter to senior Brant Kuithe and sophomore Devaughn Vele. With the game still in reach, a critical fumble by Aztecs sophomore tight end Aaron Greene on a kickoff return gave the Utes excellent starting field position. Another touchdown connection from Rising to Vele capped off a run of 21 unanswered points by the Utes, and the  intensity of the Aztecs’ defense played within the first half all but vanished.

The third quarter was no consolation, as Utah junior Tavion Thomas scored an 18-yard rushing touchdown after a Crum interception. A 3-yard floater from Rising to Vele completed the scoring for the Utes who increased the score to a miserable 35-0 over the Aztecs.

“They had a little momentum obviously. One was after a fumble which was a short field. I just think they got in sync. They got in a rhythm,” Coach Hoke said after the Aztecs gave up touchdowns on five straight drives.

Crum began to settle into the game in the fourth quarter, as the Aztecs took advantage of a muffed punt by Utah junior return man Tiquan Gilmore. Crum delivered a strike on 4th and 6 to junior receiver Brionne Penny to keep their scoring hopes alive. Later in the drive, Crum found Penny once again, this time for a touchdown, but one that was quickly negated by an Aztec penalty. On the very next play, Crum found redshirt freshman receiver Josh Nicholson for an 18-yard touchdown to complete the scoring 35-7. It was both Crum and Nicholson’s first career touchdown.

Crum’s final stat line was five for 16 for 53 yards, one touchdown and one interception. The leading rusher for the Aztecs was sophomore running back Jaylon Armstead, who carried the ball five times for 31 yards. The Aztecs only managed a meager 3.3 yards per carry as a team, far from the formula of success that Brady Hoke instilled in last year’s record setting season.

“If this doesn’t hurt, I don’t know what does. I think a lot of our players feel this, if not all of them,” Tavai said. “We’re going to come back together.”

After starting five of 15, Rising finished the night 18 of 30 for 224 yards and four touchdowns, the most of his career. Thomas carried the rushing load for the Utes totaling 59 yards on 16 carries and one touchdown.

Going forward Crum will continue to back up Burmeister as it was announced Tuesday that Haskell will enter the transfer portal and leave the SDSU program. Hoke also noted Tuesday that Burmeister will be good to go for the game against Toledo.

Facing more questions than answers, the Aztecs look to bounce back at home next weekend against the Toledo Rockets, who are coming off of a thumping loss to Ohio State in Columbus.