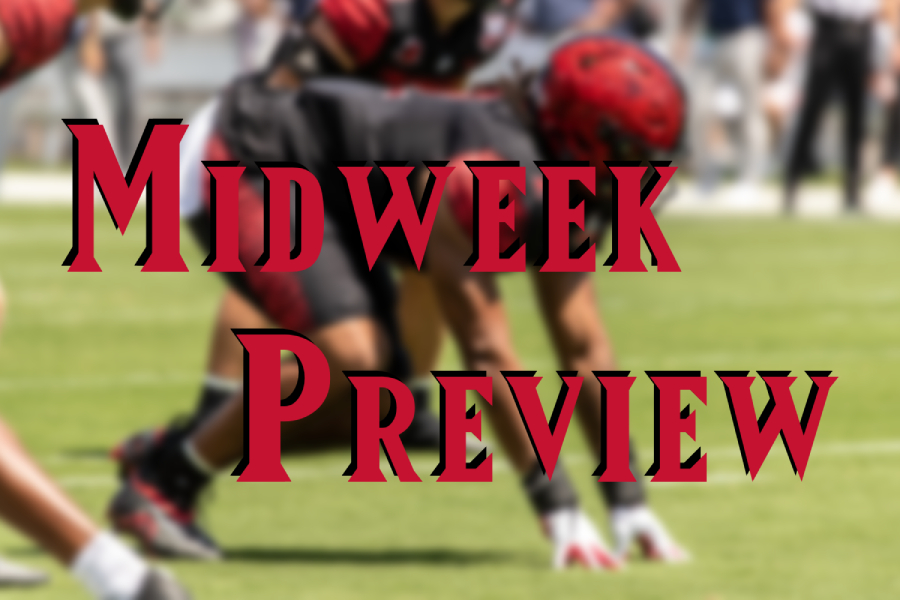 Every Wednesday The Daily Aztec will help San Diego State University fans get ready for the upcoming sports schedule with the Midweek Preview. Here is the schedule of Aztec athletics events for this week:

San Diego State saw their run of three straight draws snapped by a 2-0 loss at No. 1 UCLA last Thursday. The Mountain West opener features a Rams team that was predicted to finish seventh in the conference and has scored once in their last four matches. Seniors midfielder/forward Liv Layton and forward Aleyse Evers have scored a pair of goals. Colorado State is tied atop the MWC with three shutouts and has allowed the second-fewest average shots on target per game.

Despite SDSU dropping their last eight matches, four of those were at the hands of opponents who are either still currently ranked or were receiving votes at the time. Sophomore Mikela Labno led the Aztecs with 10 kills and freshman Madison Corf added nine in the 3-1 loss at University of San Diego on Sept. 17. Redshirt sophomore outside hitter/right side Blaire Fleming was named Mountain West Conference Offensive Player of the Week for the Spartans after earning an All-Tournament Team selection at the Trojan Challenge, where SJSU went 2-1.

Men’s Tennis at Silverado Invitational, all day Friday through Sunday

Senior Chikaya Sato, junior Johannes Seeman and freshman Eugenio Gonzalez Fitzmaurice all went 2-1 in singles action at the Battle in the Bay in Berkeley, while sophomore Liam Spiers posted the same singles mark at the Wildcat Invitational in Tucson, AZ, last weekend. Spiers and freshman Lenny Melzer also made it to the consolation final of the doubles tournament at Battle in the Bay, but the final day was rained out. The Aztecs travel to Napa for the Silverado Invitational for the first time since 2019.

The Aztecs finished eighth out of 18 teams at the Maui Jim Collegiate on Sept. 9 through Sept. 11 at Mirabel Golf Club in Scottsdale, Arizona. Sophomore Shea Lague had the top finish for SDSU, finishing in a fifth-place tie at 12-under while shooting a new personal career collegiate low 18 during the second round with a 64. This will be the first time since 2019 that SDSU has participated in the William H. Tucker Intercollegiate, which is hosted by New Mexico and takes place at the UNM Championship Course in Albuquerque.

The messages from the players couldn’t be more clear at a media availability on Tuesday after the 35-7 loss at Utah; resiliency and focus on growth. Senior Alamu Uluave spoke of the need to “be the guy you said you were gonna be when times are tough,” while senior Caden McDonald said, “there’s room to improve all around…That’s the exciting part; we as a team have not played the best Aztec football yet.” The Rockets are coming off a 77-21 drubbing at No. 3 Ohio State but feature both the top offense in scoring (37.7 points per game) and defense (29.0 points allowed per game) among Mid American Conference schools. Sophomore quarterback Dequan Finn has thrown for 541 yards with five touchdowns and rushed for 208 yards with four touchdowns orchestrating the Toledo offense.

Labno has notched 10-plus kills on two of the last three for SDSU and her four matches with double-digit kills are second behind junior Heipua Tautua’a’s team-best six. Nevada was picked to finish at the bottom of the MWC but features sixth-year outside hitter Kayla Afoa, who leads the conference with an average of 4.40 kills per set. Afoa did not see action in the 2020 and 2021 seasons after being a Mountain West All-Conference Team selection as a junior in 2019.

The Aztecs opened Pac-12 play last week on the road by dropping a 2-0 decision to Cal before rallying to earn a 0-0 draw against No. 2 Stanford. Three of the four matches SDSU has earned points from this season have come against ranked teams. The Tritons were picked to finish last in the Big West Preseason Coaches Poll, but are 1-1-2 against mutual opponents. Senior midfielder Allen Alessandro (one goal, two assists) and graduate student forward Nick Cirrito (two goals) are tied for the team lead with four points for UCSD.

Eight different Aztecs have scored this season, as sophomore Denise Castro leads the way with five and junior Emma Gaines-Ramos has three. Wyoming travels to the Mesa after facing New Mexico on Thursday. Senior midfielder Jamie Tatum is fourth in the conference with four goals in six games. The Cowgirls have three of the top six shots per game players in the Mountain West with Tatum and freshman midfielder Alyssa Glover each averaging three, while junior forward Alyssa Bedard is tied with Castro for fourth at 2.29 shots per game.