The Aztecs lose both matches at SDSU/USD Challenge 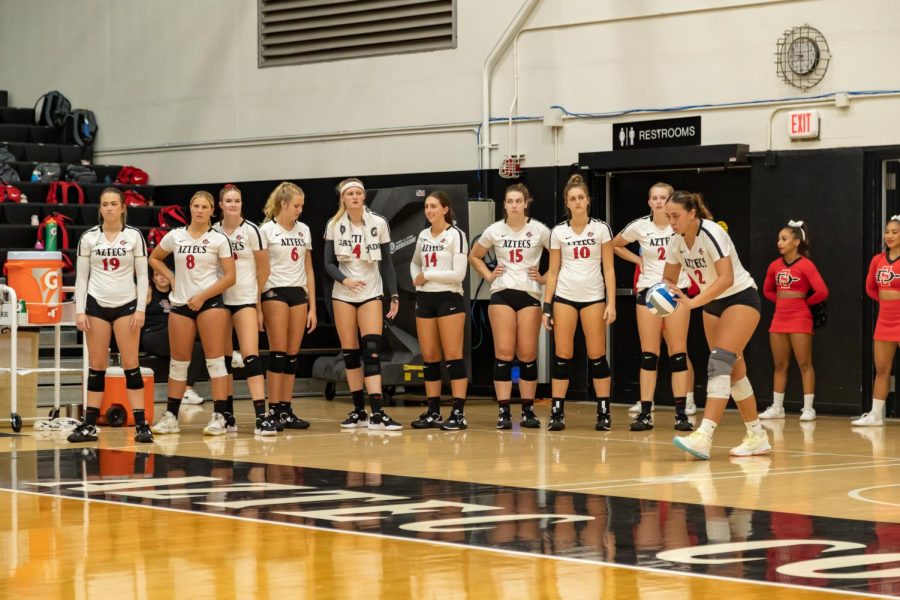 The Aztec volleyball team looks on as junior Heipua Tautua'a prepares a serve.

San Diego State volleyball (2-9) lost both matches this past week. Despite the losses, the crowd’s energy boosted the team’s confidence.

This past week the energy of the crowd was amazing at Peterson Gym. Playing against a big team such as UCLA, the whole gym was almost filled with fans. With the disappointing outcomes, Head Coach Brent Hillard said that the team’s performance was unstable but overall is still improving.

“Inconsistent, but I was proud of them. They’ve been handed a pretty tough preseason schedule and they are still really working on getting better,” Hillard said. “They did some things well, we did have some players perform extremely well like Madison Corf and Ellie Geoghegan.”

With mostly everyone on the team being new and still getting to know each other,  putting a new lineup out that hasn’t been together for a while had an effect on the game. Hillard said for the second set, they fought hard which helped them lead the whole set.

“I was disappointed in myself for putting something out there that I think we weren’t quite ready for,” Hillard said. “The rest of the way I thought the team fought pretty  well, the second set was excellent. We led the whole game and they performed well. Just in clutch moments, they missed out on plays they would normally make”.

The team is still trying to find its rhythm during these preseason games.

“It’s really hard going into matches with this schedule and be like ‘hey, we need to get this win and this win.’ That is where confidence comes into play,” Hillard said. “For a team like USD, who is ranked at the top ten, you are looking more for consistent play and you’re looking for a lot of freshmen to continue their growth. This team hasn’t been together for very long and there are not a lot of seniors that have been in our program. Our seniors are all transfers so we are still trying to get to know each other.”

Senior transfer Kayla Rivera earned her bachelor’s at Georgia and had 15 combined kills in both games. Rivera explained how confident the team was against UCLA because of the great atmosphere of the crowd.

“The energy of the crowd was amazing. Either you feed off of it or you fall off of it,” Rivera said. “With a young team, it’s pretty 50/50 what you are going to get. We did a good job being able to feed off the energy and keeping it on our side and also bringing our own. We are kind of on a losing streak right now, and we are kinda getting tired of it, so people are coming in with fire and it makes being on the court a lot more fun.”

The Aztecs will return this Thursday, Sept. 22 to open their conference against San Jose State in Peterson Gym at 7 p.m.