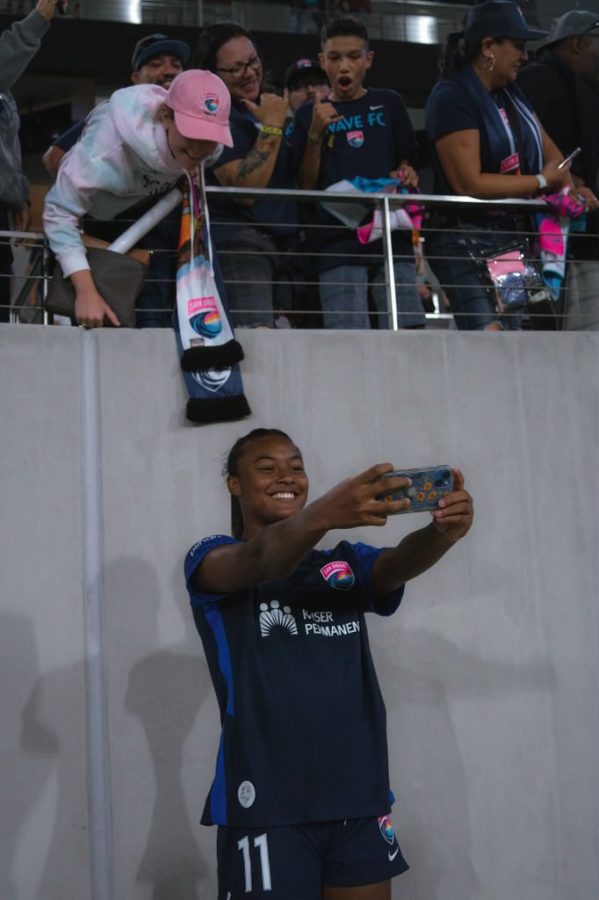 San Diego Wave’s first-ever game at Snapdragon Stadium was one to remember.

The big game started at 7 p.m., but the festivities lasted all day long.

The San Diego community had been anticipating the opening of the stadium for a while and you could truly see the anticipation burst in the crowd. The Wave completely sold-out the stadium at 32,000 attendees, shattering the previous National Women’s Soccer League single-game attendance record of 25,218.

“The fact that this organization had the ambition of selling out this stadium for the first game,” Wave and NWSL leading-scorer Alex Morgan said. “That just shows the testament and what we are looking to do in the coming years since this is only our first year.”

Shaw is now a major inspiration for young girls across the country whose dream is to play in the big leagues.

This game brought so many people in the San Diego community together. People from all backgrounds came to celebrate the first-ever soccer game at the brand new Snapdragon Stadium.

This game was extremely important; not just for bringing the community together, but it truly showed the growth and future potential of women’s soccer in a year where even more strides have already been made.

In February of this year, the United States women’s national team settled their equal pay lawsuit against the U.S. Soccer Federation for a total of $24 million. Then in early September, representatives of the women’s and men’s national teams officially signed their new collective bargaining agreements with the U.S. Soccer Federation which allows for equal pay through identical economic terms, including commercial revenue sharing and equal World Cup prize money.

Professional female soccer players were constantly being underpaid while their male counterparts were paid a higher amount. One of the main issues was the players’ bonuses, where the men’s players were paid thousands more in bonuses for reaching equivalent achievements as the women’s team.

“For many years I was told I couldn’t play, and now there are more opportunities than ever,” Stoney said. “If you can see it, you can be it.”

The San Diego Wave are currently coming to the end of their inaugural season. The Wave were founded on June 8, 2021 and are already top of the NWSL leaderboard with 34 points and two more games to go in the regular season.

The 2022 NWSL playoffs will feature the top six teams at the end of the regular season, with the top two seeds earning a pass to the semifinals. The quarter finals are set to begin the weekend of Oct. 15-16 across CBS Sports Network and Paramount+.

Before then, the San Diego Wave will have to focus on their upcoming match against the Orlando Pride on Saturday Sept. 25. Then they close out their season against the North Carolina Courage on Friday, Sept. 30 in another opportunity to sell out Snapdragon Stadium.