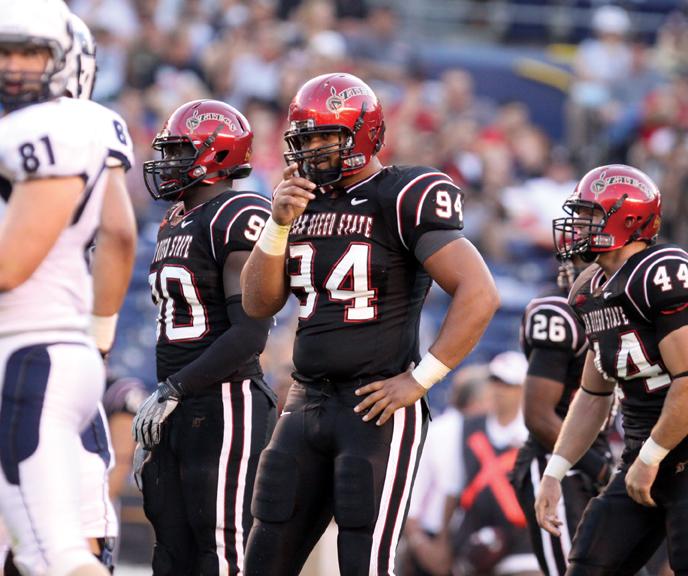 Senior quarterback Ryan Lindley shined during Saturday’s 49-21 victory against the Mustangs, breaking a school record held for more than 20 years. Sophomore running back Ronnie Hillman also had a standout night, not missing a step from last season. The win — Rocky Long’s first as head coach — avenged the previous losses to Cal Poly in 2006 and 2008.

Long expressed concerns all week when he spoke about the Cal Poly offense. The Mustangs traditionally run a triple-option offense, but this offseason Cal Poly decided to implement elements of the spread option — a change that appeared to throw SDSU offguard in the second quarter as the Mustangs scored 14 points and looked like they were in the game for the long haul.

Until the third quarter started.

The Aztecs held Cal Poly to 10 yards in the quarter and allowed the offense time to put the game away. Sophomore safety Nat Berhe credited halftime changes to the dominant defense in the third quarter.

“We made a lot of adjustments in the secondary,” he said. “We moved to a lot of cover two which helped a lot.”

The Aztec offense dominated Cal Poly for the majority of the game, a far cry from the last time the teams met in 2008. In that game the Aztecs could only muster 27 yards rushing while passing for 352 yards. The team displayed a much different and more balanced effort on Saturday as it ran for 289 yards and passed for 203.

Hillman was the main cog of the offense, carrying the ball 28 times for 191 yards. The sophomore running back went over the 100-yard plateau for the third straight game and for the seventh time in his career.

The running game opened the game up for Lindley. The Mustangs continually bit on play-action passes in fear of Hillman, leaving receivers wide open. Sophomore wideout Dylan Denso told the media after the game he could see how much the running game helped the passing game.

“You can tell when you have a defensive back in front of you and he’s looking in the backfield,” he said.

Lindley broke the SDSU record for career touchdown passes, totaling to 71 for his career and breaking the old mark of 70. Coach Long said he was pleased with the offensive performance.

“I thought the offense played well in the first half,” Lindley said. “They struggled a bit in the third quarter, they didn’t have the same rhythm they had in the first half but they cranked it back up.”

Denso dines on the Mustang secondary

Denso entered the day with four career catches — by the end of the game he had matched that total, racked up more than 60 yards and scored twice.

He has been described by Lindley as a new face who is going to help fill the void at receiver. Denso remained humble.

“I’m going to do whatever I have to do for the offense,” he said. “I don’t really care about personal stats. It’s always good when the team gets the win.”

His performance may have calmed down some doubtful SDSU fans who have questioned this season’s group of wide receivers.

“We wanted to let everybody know that they don’t have to worry,” Denso said. “I think this game is going to help a lot with our confidence.”