SDSU soars in win against Falcons 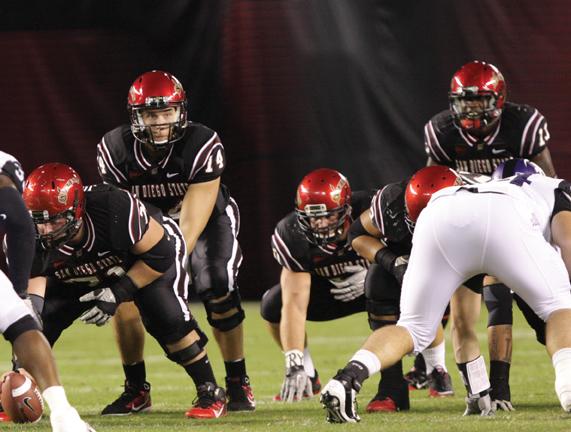 Ahead 20-17 in third quarter with the ball in San Diego State territory, it appeared Air Force was on its way to put SDSU in a ten-point hole on Thursday.

Until sophomore defensive back Rene Siluano made the play that changed the complexion of game.

Siluano jumped in front of Falcon quarterback Tim Jefferson’s pass and gave the Aztecs the ball back at their own 39-yard line.

It was the end of a challenging three-game stretch for the Aztecs who now head into the bye week at 4-2 for the season with a 1-1 record in conference.

Ryan and Ronnie return to form

Lindley had his most efficient game of the year, as he completed 15 of his 21 pass attempts for 209 yards and two touchdowns.

Lindley’s 71 percent completion percentage was his highest of the season.

It was an encouraging performance considering the senior’s play against TCU.

Hillman returned to his early season form with 172 rushing yards on 27 carries to go along with two touchdowns.

Hillman’s two touchdown runs came in the fourth quarter, his 57-yard score put the game out of reach. No fumbles for the sophomore was also a positive.

Both of these playmakers’ performances were helped by the offensive line, which gave Lindley ample time to throw and Hillman holes to run through.

Head coach Rocky Long pointed out the unit’s performance after the game.

“I don’t know if Air Force’s defense was quite up to its standard,” Long said. “But I think our offensive line was able to hold them and capitalize on the mistakes made.”

It’s officially a trend now: The Aztec defense looks like it’s about to give up a backbreaking score, but then it comes up with a turnover at the most opportune time.

Siluano’s pick was a perfect example of that.

Long was quick to notice the importance and magnitude of the interception.

“The interception we made really turned the tide and turned the momentum,” Long said.

On the next defensive play senior defensive lineman Jerome Long forced a fumble, which was recovered by SDSU.

Lindley tossed a touchdown pass to Lockett on the very next play to give the Aztecs the lead for good.

The sequence of plays jumpstarted the SDSU train that wouldn’t be stopped for the rest of the night.

“Their kid made a heck of a catch on the interception and they went down, they answered with points,” Air Force head coach Troy Calhoun said. “We held them in the rezone, and then turn around and have the fumble … That stretch of only about seven plays, I thought was a pretty significant part of the game.”

According to The San Diego Union-Tribune sophomore tight end Gavin Escobar broke his hand in the first half and may miss three to four weeks.

Senior defensive back Larry Parker came up with another interception, giving him five this season. It was his fourth straight game with a pick. It was the 19th turnover forced by the team this season.