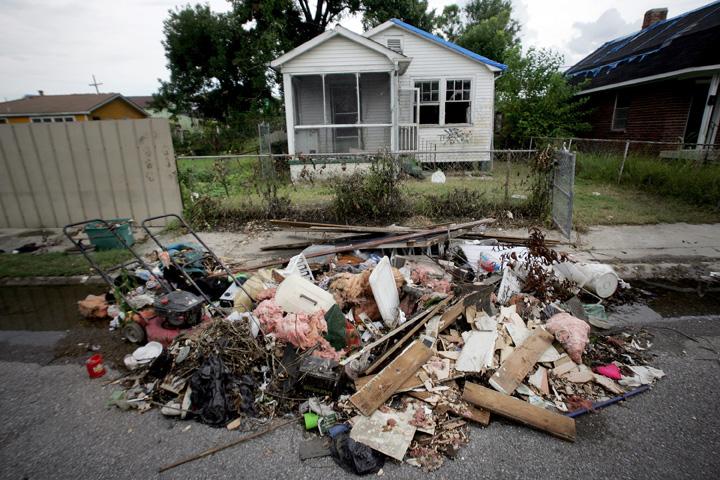 In 2005, Hurricane Katrina devastated the U.S. Gulf Coast, killing around 2,000 Americans and leaving thousands who did survive homeless. More than 1,800 miles away one San Diego State student organization has dedicated itself to rebuilding the hurricane-damaged New Orleans.

Feeling deeply compelled to help out immediately after the natural disaster, Adam Kronenberg, an SDSU alumnus, traveled to New Orleans to help provide aid in the aftermath. After returning to SDSU, Kronenberg desired to further his cause. The results of his compassion for Katrina’s victims led to the creation of College Students for New Orleans (CSNO) at SDSU in 2007.

CSNO travels to the hurricane-devastated city in Louisiana every Winter, Spring and Summer Break. The first trip in 2007 consisted of five students who helped to rebuild the city. Now, CSNO has grown to compel 50 students to travel across county to help this year.

CSNO organizes college students to work for nonprofit organizations, which are located in the New Orleans area. CSNO operates mainly with the St. Bernard Project, a nonprofit firm that is dedicated to assisting Katrina survivors. St. Bernard Project’s director and co-founder president, Liz McCartney, was named last year’s CNN Hero of the Year. This exposure led the non-profit organization to raise money and grow significantly after.

“People don’t realize that the city is still in need of assistance since Hurricane Katrina hit several years ago,” CSNO Vice President, Sarah Macapagal said. “You see homes that have only foundations and many that have been gutted out.”

Thousands of victims were left homeless, many forced to relocate to different states and others robbed of their possessions amid the chaos. Despite the tragic circumstances, the Bush administration is strongly criticized for its lack of government assistance to this situation. Insufficient help from the government makes charity work from groups such as CSNO even more important.

Upon arrival to New Orleans, CSNO began to work side-by-side with AmeriCorps professionals to learn how to rebuild homes.

“It is a team of man power and hands-on work, Monday through Friday, all day,” Macapagal said. The reconstruction process consists of three steps: mold remediation, dry walling and flooring and windows. CSNO members are fully trained to complete all three tasks.

“(CSNO) is a great way to meet people on campus, from all different majors,” Macapagal said. “It attracts good people. It is a good social experience, but at the same time very fulfilling because you get a sense of (having) a huge impact on others.”

Macapagal also said she had made several good friends through the organization. While the program involves a lot of hard work, there is still time for fun.

“You get to experience New Orleans in a whole new way,” Macapagal said. “The locals love us and like to make sure we are doing OK. At night, the students enjoy local cuisine while listening to Southern musicians. And of course, students explore the famous bar lined Bourbon Street. Relationships with other CSNO members. It also provides an opportunity for students to have a friend to connect with, making it more likely they would want to return to the Gulf Coast for vacation.

CSNO fundraises most of its money, so the average cost of a trip is approximately $350. This expense includes a round-trip ticket, housing and meals. A little extra cash may be desired for eating local cuisine and enjoying nightlife.

Although winter trip is now filled, there is also a possibility for a Spring 2010 trip. The organization will be looking for new leaders this spring semester. This is an opportunity for students to get involved in a new way while gaining leadership experience. For more information, visit studentsvolunteer.googlepages.com.