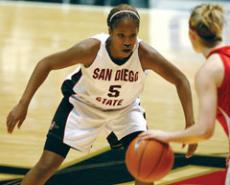 The 2007-08 campaign has been a season of firsts for the San Diego State women’s basketball team.SDSU recorded its first winning record since 1997 and its first ever since joining the Mountain West Conference.Also, the Aztecs’ top-three scorers of the year, Paris Johnson, Allison Duffy and Jené Morris, played on the Montezuma Mesa team in their first year.But now SDSU (16-12, 7-9) will face a new challenge this week as it seeks its first victory in a MWC Tournament.The Aztecs face off against Wyoming (24-5, 12-4) in a quarterfinal matchup for the second consecutive year. Last season, the Cowgirls knocked out SDSU by a score of 56-44.Wyoming swept the season series against the Aztecs, and SDSU players are keeping this in mind.”Knowing we’ve lost to them twice already this year, I really want to beat them,” said Johnson, a freshman center. “Since we’re so familiar with each other, there are no surprises, it’s just about going out and playing your best.”The Cowgirls are no stranger to the post season, going through the women’s National Invitation Tournament last year and coming out champions. On top of that, they kept all five starters from the championship team and continue to have success running their distinctive offense.”For these two bigs, (Duffy and Johnson) Wyoming is a unique challenge because they are huge, and I say that respectfully,” head coach Beth Burns said. “But they all play the perimeter and do so very well.”But what the Aztecs lack in size and experience they make up for in speed. SDSU ranks first in conference steals and Morris, a sophomore guard, ranks first in the MWC and 27th nationally in takeaways.”Wyoming poses a special threat with their size, but we’re going to try to spread them out and use our speed,” Burns said. “With this being our third matchup, we have a good understanding of their game.”The Aztecs will enter Wednesday’s game riding a three-game winning streak, most recently routing Air Force in the regular season finale at Cox Arena last week. SDSU has had its ups and downs throughout the year including a conference record of four straight losses, followed by four straight wins, then a five game losing streak, and finally three victories to close it out.”We’re coming in confident thanks to how well we played to close out the year,” Burns said. “And when you have a team as young as us, confidence is one of the most valuable things you can have going into a game like this.”

Why to watch: The Aztecs will look to get their first win against Wyoming this year as well as advance past the first round of the MWC Tournament for the first time in conference history.