Taking it beyond a college education 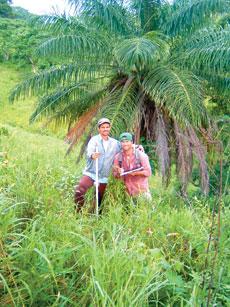 Eight degrees north of the equator stands a hot and humid town with a population of no more than 500 people. This place is known as Los Asientos, Panama, and it was here that San Diego State alumnus Shane Mathias made memories that would last him a lifetime.

During a three-year service in the United States Peace Corps beginning in 2004, Mathias made agricultural observations and helped with reforestation research in Los Asientos.

“As a political science major, I was able to learn about the different hardships other countries went through,” Mathias said. “I knew these hardships oftentimes weren’t things they had asked for, rather forced upon their people, and I wanted to make an impact.”

Like any person traveling to a new place, becoming accustomed to your surroundings is essential to survival. All Peace Corps volunteers must take a three-month training program that prepares patrons for their upcoming service. Although the program includes four hours of language lessons and four hours of technical exercises a day, it still may not be enough.

“The hardest thing for me was becoming accustomed to the city and the people – getting them to trust me and break the language barrier was hard at first,” Mathias said.

Over the three years, Mathias made new friends that would last him for years to come. Alongside local farmers, Mathias recorded statistical data in regards to reforestation, helped with the ongoing problem of declining soil nutrients and even worked with the local Smithsonian lab.

“Los Asientos is a town that primarily comes from Spanish descent, so for this reason a lot of the locals had been raised as traditional Spaniard farmers,” Mathias said. “They were very reluctant at first to include me as one of their own, but with time spent in the fields with them, they became much more open to me.”

Joining the United States Peace Corps isn’t as easy as filling out an application. Basic requirements include being a U.S. citizen of at least 18 years of age, having a strong motivation to help others, a suitability for the program and cultural awareness. A college degree isn’t required, but with 90 percent of volunteers in possession of one, a degree is certainly well regarded.

Although the Peace Corps is a volunteer service, it does have its advantages post duty. Volunteers who successfully complete a term of duty are eligible for one full year of non-competitive federal jobs, $6,000 in compensation and a resume that shows your ability to make a difference in your life.

“As a young person, college seems like a long time, but when you look back on it, four years isn’t a big chunk of your life,” Mathias said. “Taking two years after college to make a difference in your life and other peoples’ lives is not a lot of time, but could be very rewarding and would leave you with real life experiences and memories.”

Visit www.peacecorps.gov for more information or to apply for the U.S. Peace Corps.