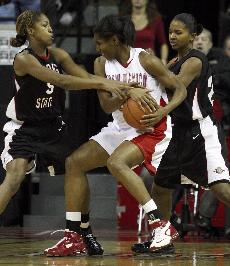 LAS VEGAS – The problem with wearing a glass slipper is that it’s so fragile.One false step, and it can shatter before your eyes.For the San Diego State women’s basketball team, all it took was one misstep to end its Cinderella run to the finals of the Mountain West Conference Championships.Sophomore guard Quenese Davis’ buzzer-beater rimmed out as SDSU lost to New Mexico 62-59 today at the Thomas and Mack Center.The final shot came just 12 seconds after Davis hit a running 3-pointer to bring the Aztecs to within one.Lobo guard Amy Beggin was fouled and hit two free throws, leaving SDSU enough time for one final look.”All you can ask for is a chance at the end,” head coach Beth Burns said. “She had a good look and it almost went down.”Davis’ range also played a big factor in the first half. With the Aztecs’ top scorer – sophomore guard Jené Morris – on the bench with two fouls, they struggled to find offense. But with Morris out of the game, Davis hit three 3-pointers to guide her team to a six-point halftime lead.Foul trouble became a big concern for SDSU, however. Freshman forward Allison Duffy picked up three fouls in the first half and Morris and freshman center Paris Johnson both picked up their fourth fouls with just over nine minutes to play.”It affects you a lot, offensively and defensively,” Duffy said. “You have to take it down a notch, so that does hurt.”And with 4:40 to go, Morris got hit with her final foul, finishing with 10 points in just 19 minutes.”Because of our foul situation, any flow that we might have had made things really challenging,” Burns said. “It was really disruptive.”Even with the loss to the Lobos (20-12, 12-7 in MWC play), the Aztecs accomplished more than they were expected to. SDSU (18-13, 9-10 in MWC play) came in as the No. 6 seed and upset No. 3 Wyoming and No. 2 TCU – two teams that swept the Aztecs during the season and will likely make the NCAA Tournament.”This is why we do what we do (as coaches),” Burns said. “I can’t even put it into perspective.”On Wednesday, SDSU, which had never won a MWC Championships game, used a stifling defense to stop Wyoming, 66-54. In the semifinals against TCU, Davis bounced a ball off of Adrianne Ross’ back and put in a layup with 18 seconds remaining to give the Aztecs a 69-67 victory.And while the defeat will sting for SDSU, that pain might get the team over the hump in the future.”I’d like to think we’ve only just begun,” Burns said. “There’s nothing better than? to come in second.”That gives you the hunger and the passion to do what you’ve got to do.”