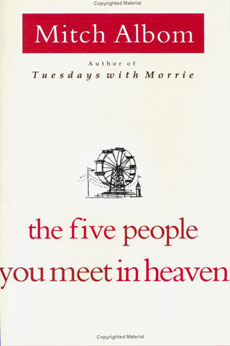 The Five People You Meet In Heaven

The age-old question still exists, “What happens after you die?” Artists, poets and novelists have given us many interpretations throughout time. Mitch Albom is one of these novelists who took the conquest of answering this philosophical question through the character of Eddie in the emotional, thought-provoking book The Five People You Meet In Heaven.

Eighty-three-year-old Eddie works at Ruby Pier as a maintenance man, an amusement park built on the beach. The children who regularly visit the pier know him as the man who fixes the rides. One afternoon, a free-fall ride goes wrong and one of the carts comes crashing to the ground loose from its cables. Eddies sees a little girl is in the path of the cart and lunges to push her out of the way only to find himself underneath the falling cart.

Eddie awakens to find himself in the heaven of his first person to meet. This heaven happens to be the Ruby Pier of his childhood. Eddie’s father had been the maintenance man before him and Eddie grew up around the park. Eddie’s first person is The Blue Man. The Blue Man explains to Eddie he will meet five people who he has impacted. The Blue Man tells his story of being a freak in a sideshow because his skin turned blue from ingesting silver nitrate as a boy to stop his bed-wetting. The Blue Man explains his death was indirectly caused by Eddie.

Once Eddie learns his lesson from the Blue Man, he is sent to his next person’s heaven. His second person is his Army Captain, who reminds Eddie of his time at war. The third person Eddie meets is Ruby, the inspiration for the amusement park he worked at. She helps him to realize his job at the park was not worthless. Ruby also helped Eddie come to terms with the cold-hearted treatment he received from his father as a young man. Eddie’s wife, Marguerite, is the fourth person he meets and the only person that he has been longing to see. Eddie was deeply in love with his wife and after she died of cancer he had felt a void in his life.

The fifth and final person Eddie meets in heaven is definitely a surprise that helps Eddie learns his job meant more than just fixing rides, but also helped keep the children who rode them safe. Eddie realizes for the first time his life did mean something. After meeting these five people and learning each life lesson from them, Eddie is then taken to his own version of heaven where he waits to teach his lesson to someone else on their journey of meeting their five people.

Albom writes each encounter Eddie has with such emotion that you can’t help but be moved by it. The one encounter that is especially emotional is Eddie’s visit with his wife. They just devour their time together and catch up with all that they have missed since being apart. Eddie realizes here how much his missed having Marguerite in his life. They dance together like the first time they met.

This book is short and sweet, and offers a lot of ideas to think about. Albom tackles life questions that everyone has experienced sometime or another and can relate to. If you want a book that will leave you with a good feeling inside and a new sense of self-worth, The Five People You Meet In Heaven will do that for you. You might even learn a life lesson from one of Eddie’s five people.