Turtles are unwelcome guests at SDSU 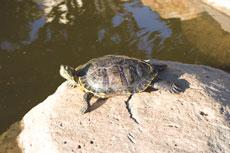 During finals week, my friends and I found ourselves at the pond by Scripps Cottage, discussing the turtles in it. What do they eat? Why are they there? Do they have names? (This probably explains the grades I received on my finals.)

When the answers to these questions were still bothering me a week later, I decided to do some research. So, for everyone who’s ever spent time thinking about the turtles, here’s everything you’ve ever wanted to know and more.

Where do they come from?

I had always assumed these turtles were San Diego State’s gift to us, a little moving present that a portion of my tuition had paid for. Actually, the animals are uninvited guests, according to Randy Frater, one of the caretakers of Scripps Cottage.

“We assume that people have just been dropping them off,” Frater said. “Over the months and years, people have brought them in. We have nothing to do with them.”

Who takes care of them?

No one. Frater said SDSU does not feed the turtles or care for them in any way. So how do they survive? The turtles in the pond are Red-Eared Sliders, a species native to the Southeastern United States. But Red-Eared Sliders have invaded nearly every habitat because they are one of the hardiest species of turtle.

“I’m assuming the animals in the pond are Red-Eared Sliders,” said Tommy Owens, a turtles expert who works for the San Diego Zoo. “They can live anywhere, eat anything. These animals can survive anywhere, and that’s why they would thrive in that pond.”

What do they eat?

As you might expect from animals that live in the middle of a college campus, they will eat almost anything. Frater said students provide all of the food for the animals. Owens was not surprised.

“Red-Eared Sliders will eat anything from garbage to left over Taco Bell,” Frater said. “I’m sure they’ve become accustomed to being fed, but they also probably catch a fair amount of food in the pond.

“I’ve seen them eat baby ducks. If they can get a piece of the animal in their mouth, they’ll eat it.”

Why don’t they eat the fish?

Although this brings up an image of some vicious predator, Frater said the turtles don’t seem to bother the Koi fish that SDSU intended to keep in the pond. Owens said this is because the Koi are too large for the turtles to eat.

“There isn’t any part of the Koi that the turtle could get in its mouth,” Owens said. “However, I’m sure they bite the Koi.”

Would they bite a human?

Although they likely bite the fish, Owens said the people around the pond should be safe.

“They might mistake a finger being dipped into the water for food, and they are curious, so people should be careful,” he said. “But in reality, they’ve probably become accustomed to people feeding them by now.”

Are there any problems with the

As far as the Red-Eared Sliders go, they are right at home in the pond. They have a steady supply of food, plenty of water to swim in, etc. Even the recent cold weather hasn’t been a problem for them.

“These animals are used to much colder weather than they have here in California,” Owens said. “They’re very adaptable; they can live almost anywhere.”

“People don’t realize that these animals live for 40 years,” Owens said. “Then they get rid of them by just putting them in a pond somewhere. They think they’re helping, but they’re really just adding to the problem.”

For more information on the care of turtles, or for adoption information, visit the San Diego Turtle and Tortoise Society’s Web site, www.sdturtle.org.

?Preferred habitat: Aquatic, although they do come on land to nest and sun themselves.

?Food: The turtles are not picky, but they prefer meat

?Breeding period: Will attempt to mate year-round but usually lay eggs only twice a year