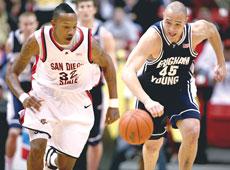 The San Diego State men’s basketball team would be wise to take a long, hard look at the Thomas and Mack Center tonight.If it’s smart, the team will get used to the locker room and find a certain comfort level in the building.SDSU’s biggest game of the year will be played in that very arena – in 16 days.The Aztecs take on second-place UNLV (20-6, 9-3 in Mountain West Conference play) at 7 p.m. today in Las Vegas at the Thomas and Mack Center, the sight of the MWC Tournament that starts on March 13.While this game is far from insignificant, the final conference standings likely won’t change much with three games to go. That means that unless SDSU (18-9, 8-5) picks up three straight wins or three straight losses to end the season, the team is very unlikely to move from the No. 4 seed.And at this point, wins and losses take a backseat to mental toughness. With no realistic chance at an at-large seed to the NCAA Tournament, the Aztecs need to prepare for a run in the conference tournament.Just a few games ago, SDSU looked like it would never be ready for that run. The squad suffered three consecutive losses after junior forward Kyle Spain was suspended for the season.But the Aztecs started to look comfortable at Utah. Although they lost the game, it sparked two straight wins, including Saturday’s 69-65 victory over first-place BYU.And right now head coach Steve Fisher likes where his team is mentally.”I think our morale started to turn at Utah,” Fisher said. “Then we go to Wyoming and win, which is extremely important.”Now (the BYU game) solidifies what we have talked about, that we are capable of beating any team in this league.”SDSU is starting to get into a groove without its second leading-scorer Spain in the lineup. Junior forward Lorrenzo Wade continues to show this is his team, but the season-long emergence of freshman forward Billy White has been even more impressive.White, who was named the MWC Player of the Week yesterday, has been a beast at both ends of the floor. In the last two games, the Las Vegas native has picked up 34 points, 20 rebounds, four blocks and four steals.”(White) is so long and athletic and he is playing with the confidence now that goes with his ability,” Fisher said.Wade, who is from Sin City as well, has also given teams fits. He scored a career-high 28 points against the Cougars and has put the Aztecs on his shoulders.But what makes Wade so good is his ability to pass the rock, especially when double-teamed. He leads the team with 81 assists.”(Wade) has such great vision and finds people when they move,” Fisher said. “He creates a lot of problems for people.”