JAM: At the Drive-In Reuniting at Coachella 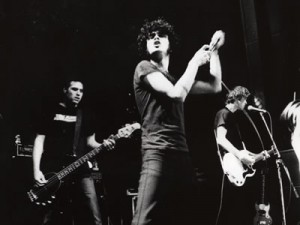 I’ve never been a fan of music festivals, and for a number of reasons: the strenuous heat and cold nights, the overpriced food and water, the cigarette smoking hipsters who eat only organic food, notto mention ridiculously priced tickets—it’s just the perfect storm for me.

My distaste for music festivals includes what is probably the most anticipated music festival in California—the Coachella Valley Music and Arts Festival.

I know, I know—some of the greatest acts in music perform at Coachella, including Morrissey, Madonna, Jay-Z, and Paul McCartney, but I never thought it was worth it to pay $300+ dollars to sit through a number of bands I didn’t care for just to see a handful of acts perform for the better part of an hour.

However, the Coachella Valley Music and Arts Festival has been known to host band reunions, including Rage Against the Machine in 2007. This year, however, Coachella Fest is hosting a pretty big reunion: At the Drive-In.

After 11 years since their 2001 break-up, the band announced on January 9 through their Twitter account that they will be reuniting.

“THIS STATION IS…NOW…OPERATIONAL”, tweeted the band, referencing the title of their compilation album This Station is Non-Operational, released four years after their break-up.

Spin magazine speculated whether or not the hard rock band will be performing at Coachella, which they later confirmed shortly after the announcement of their reunion.

And so, for a good few days, I seriously considered attending Coachella this year. I thought about purchasing my $300 ticket, booking a hotel room, and enduring the heat as well as the crowds. But, as usual, tickets sold out like hot cakes, which is a bummer because I’ve always wanted to see frontman Cedric Bixler-Zavala and guitarist Omar Rodriguez-Lopez in action (since the dissolution of ATDI, they’ve been performing in their wildly successful outfit The Mars Volta).

But just because I won’t be seeing them at Coachella doesn’t mean I won’t try my best to catch them in a venue better dedicated to the band solely. I’m sure this reunion will result in a popular tour. Like the band said: the station is now operational.