UNLV Notebook: SDSU lets one slip away in Vegas 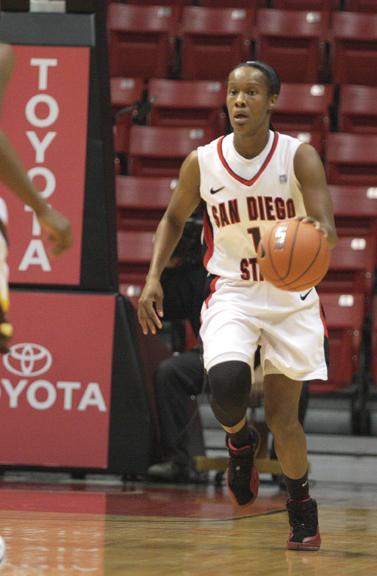 Hold the rival to one field goal spanning the last six minutes, six seconds of the game.

Shoot 49 percent and hold the opponent to 40.9 percent shooting.

Have possession of the ball and a one-point lead with less than a minute remaining.

All of that seems like it would lead to a win. But that wasn’t the case for the San Diego State men’s basketball team on Saturday.

Seventeen turnovers, an offensive rebound by the UNLV on a missed free throw in the final seconds and turnovers on each of the last three possessions led to a heartbreaking 65-63 loss for SDSU.

Those are the breaks and the Aztecs didn’t catch them against the Runnin’ Rebels as they have the past two years.

SDSU rallied back from a 13-point second-half deficit, but came up short in its attempt to beat UNLV for the seventh-straight time.

“I’m disappointed that we didn’t win the game,” head coach Steve Fisher said. “These are two teams that played so hard. And to our credit we came back put ourselves in position to win the game. To their credit they made a couple of plays.”

The loss drops the Aztecs record to 20-4 and 6-2 in the Mountain West Conference. SDSU is now in a three-way tie for first place in the conference with UNLV and New Mexico.

Rebels with a cause

Not to say this game wasn’t important for the Aztecs, but UNLV needed the win more than SDSU did.

After losing to Wyoming last weekend a loss would have dropped the Runnin’ Rebels to 5-3 in MW play with two losses to the Aztecs.

UNLV showed how much it needed this game on the defensive end.

The Runnin’ Rebels forced 17 SDSU turnovers, including three on the final three possessions, UNLV had nine blocks and 13 steals.

The Rebels didn’t get any support from their offense in the final 6:06. It made one shot during that time frame.

It was definitely an impressive performance after Moser only had nine points and 12 rebounds on 3-of-11 shooting the first time these two teams played this season.

Against UNLV, he looked like he was returning to his old form. Thames scored eight points, grabbed six rebounds and made great decisions with the ball, leading to his eight assists.

He also contributed two steals and a great block on a fast break on defense.

It was one of his best overall performances of the season as he showed poise on the road in a tough environment.

Fans might remember his turnover at the end of the game, but that one play shouldn’t define the game he had.

“Xavier made some spectacular plays for us on both ends,” Fisher said. “Iit was unfortunate that he had a turnover at the end.”

Junior guard Chase Tapley almost willed the Aztecs to a victory. He scored 16 of 22 points in the second half and hit the three-pointer that gave SDSU its only lead of the second term.

The loss snapped the Aztecs’ six-game winning streak against UNLV. SDSU has now won nine of the last 11 games against the Runnin’ Rebels.

The Aztecs will take on the Lobos at 7:15 p.m. on Wednesday at Viejas Arena. New Mexico is one of the teams currently tied with SDSU for first place in the MW.