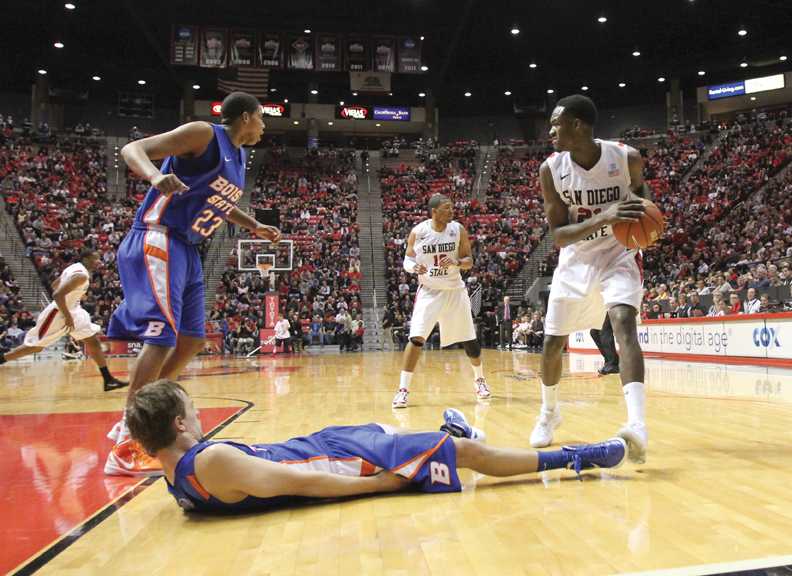 It’s no secret: Wins are hard to come by on the road in the Mountain West Conference. But last night the San Diego State men’s basketball team made it look as easy as it gets. Powered by 18 points and 12 rebounds from sophomore guard Jamaal Franklin, SDSU defeated the Boise State Broncos 66-53.

It was the third straight win for the Aztecs, who had lost three straight games prior to their current winning streak.

The game was pretty much over by halftime as SDSU built up a 16-point lead heading into the locker rooms.

For a team that has struggled on the road lately, with three straight losses on the road prior to tonight, the 16-point lead was a welcome sign. The comfortable margin of victory was the first in a long time for the Aztecs, and it pleased their head coach.

“This was a good win for us,” SDSU head coach Steve Fisher told The Mtn. after the game. “I thought in the first half we made a lot of shots and a pretty job of not giving them easy looks.”

The win, combined with the New Mexico win and the UNLV loss, leaves the Aztecs in a tie for first place with the Lobos.

Jamaal jams on the Broncos

Any doubts as to who the best player was on the SDSU team have been squashed. Franklin has asserted himself as the team’s go-to-guy.

Franklin’s most impressive play came in the second half. Following the ball off a miss, Franklin grabbed the rebound and dunked on three Boise State players.

The leap on the dunk by Franklin can be used a metaphor for his play this year. He has made a leap in his play, becoming one of the most improved players in college basketball and he is making his case for MW Player of the Year.

Franklin’s ability to improve in such a short time has even surprised Fisher.

“I really didn’t (think he was going to be this good this fast),” Fisher told KOGO 600 AM’s Ted Leitner after the game. “He is extremely competitive, very strong willed, stubborn in a positive way, wills himself to do stuff and does not let up. He’s got a mindset that has allowed him to prosper.”

The season now comes down to one game for the Aztecs. If SDSU beats TCU on Saturday, it will clinch at least a share of the MW regular-season championship. It will also get the top seed in the conference tournament.

The Aztecs beat TCU 83-73 the last time the two teams played, but TCU has been a different team at home. The Horned Frogs have beaten both UNLV and New Mexico in Waco.

“They’ve beaten everybody going in there, so we’ve got one to go,” Fisher said. “I’m so proud that we are where we are, we’ve got one game to go with a chance to get at least a piece of the conference title.”