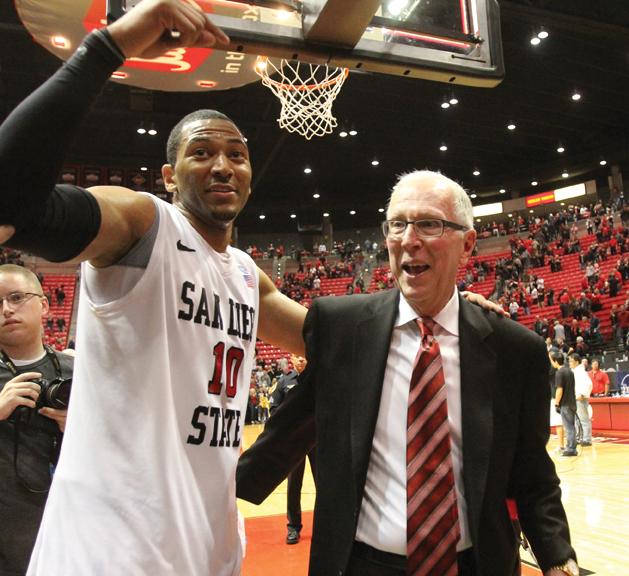 After leading his team to a 24-6 record, SDSU head coach Steve Fisher was named MW Coach of the Year.| Antonio Zaragoza, Photo Editor

It’s tournament time now for SDSU, and as any avid college basketball fan can attest, anything can happen in the month of March.

The Aztecs begin their tournament run today in the quarterfinals of the Mountain West Conference Tournament against the Boise State Broncos.

The Aztecs are entering the tournament as the No. 1 seed and are currently on a four-game winning streak.

The team is beginning to find itself again after struggling through a three-game losing streak last month.

“We’ve got our momentum back going and our confidence back up,” senior forward Tim Shelton told the media at a press conference on Monday. “We’re gelling right now; we’re feeling confident after winning the co-championship.”

In order to bring home a MW Tournament Championship, the team will have to overcome some difficult tasks.

Beating a team three times in one season is no easy chore, but SDSU will attempt to do just that when it takes on Boise State.

The Aztecs defeated the Broncos a week ago by 13 points in Taco Bell Arena, but that result doesn’t mean SDSU will take Boise State lightly.

The Broncos did take the Aztecs down to the wire at Viejas Arena, nearly pulling off a last-second upset before the game-winning three rimmed in, then out.

“We’re going to try to do what we did in the second game,” junior guard Chase Tapley said. “If we come in with the mindset we had last game, we’ll be fine.”

Another thing SDSU will have to accomplish in order to claim the championship is win three games in three days, which could be a tall order.

This Aztec team has little depth, and with no time to rest between games like there is in the regular season, tired legs may become an issue.

But now that the stakes are high and every possession in every game becomes more magnified, Tapley said the team will be prepared despite the circumstances.

“I think we’re ready,” Tapley said. “It’s the best time of the year. It’s March; these are the games you want to play in.”

UNLV was undefeated on its home court in the regular season, which has caused some complaints about a leg up the Runnin’ Rebels potentially have against the rest of the conference teams this weekend.

UNLV and SDSU are on opposite sides of the bracket, so a potential matchup wouldn’t occur unless both teams reach the title game.

If the two teams do meet for the championship, there won’t be any complaints to be heard from sophomore guard Jamaal Franklin.

It’s been an eventful week for Franklin. The sophomore was named MW Player of the Year on Monday, something nobody expected before the start of the season.

After averaging 2.9 points and 1.9 rebounds as a freshman, Franklin turned his sophomore season into his personal highlight reel. He averaged 17.1 points and eight rebounds per game this season, and scored 35 points and recorded 13 rebounds against TCU to help the Aztecs bring home the co-championship.

Regardless of the personal accolades Franklin has attained, he is maintaining his focus for winning the tournament.

“If I were to receive this Mountain West Conference Tournament Championship it would mean more than that,” Franklin said.

This season has been one of Fisher’s finest coaching jobs, replacing four starters from a Sweet-16 team and winning a share of the Mountain West is nothing to sneeze at.

But Fisher doesn’t want his team to stop there.

“Now our theme is don’t settle,” Fisher said. “Don’t settle to be co-champs. Don’t be satisfied.”