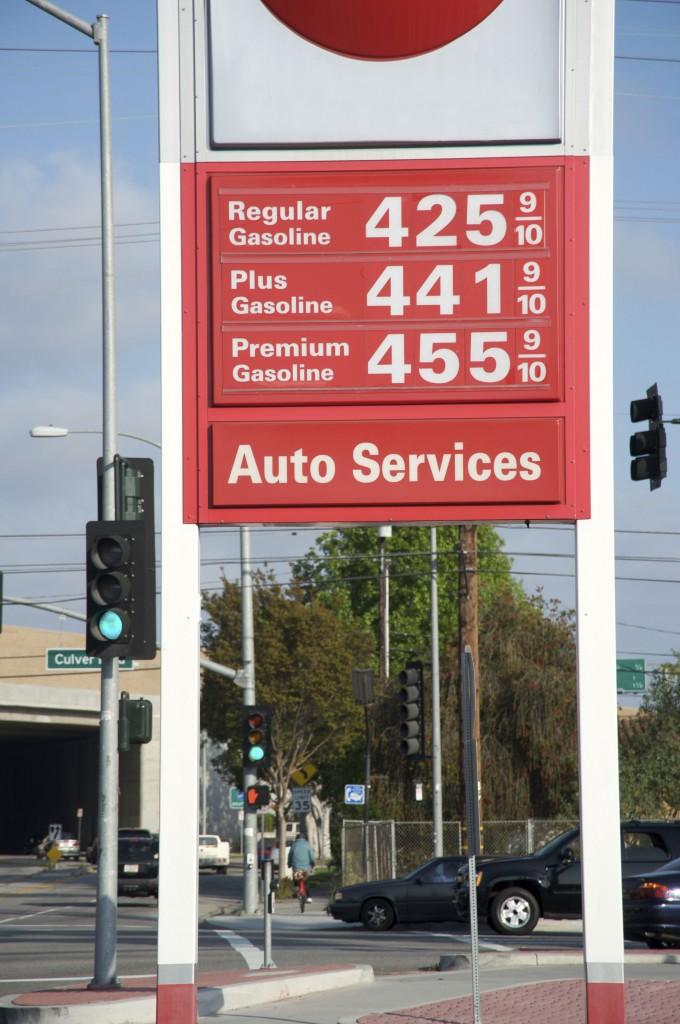 Though much of the Republican presidential candidates’ rhetoric says otherwise, gas prices are not affected by presidents. / MCT Campus

Chances are you’ve had the unpleasant experience of filling up your gas tank recently. It’s painful. If you’ve managed to somehow avoid the torturous experience, then here are some of the raw figures associated with the escalating costs of gasoline. As of March 5, gas prices in California are the nation’s highest, with the composite average for all grades of gasoline costing $4.46 a gallon. This price is a 12.3 percent increase from prices last year in March, and 56 cents more expensive per gallon than the national average. These mounting prices have directly correlated to a growing annual expenditure for Americans on gasoline. Last year, the Consumer Federation of America estimated the average American household spent $2,832 on gasoline. Using conservative estimates of gasoline consumption, the average Californian can expect to pay an additional $300 to $500 to that annual $2,832.

Such startling prices and the requisite impact upon Americans’ wallets is bound to resonate with politicians, especially in an election year. Oftentimes, Republican candidates have pandered on the topic, and attempted to demystify this incredibly complex topic by offering a simplistic explanation.

One such example of this pandering was employed by Rick Santorum, who went as far as to allege the 2008 recession was largely the fault of mounting gas prices. He claimed the “bubble burst in housing because people couldn’t pay their mortgages because of $4-a-gallon gasoline.” This is a dangerous oversimplification of two phenomena that happened simultaneously in 2008. It also shows ignorance on his part of the actual forces which caused such a catastrophic economic climate to occur.

The other pandering tactic involved the offering of blatantly hollow promises that a president likely cannot deliver. Newt Gingrich utilized this strategy when he famously promised that, if elected, he would exercise the ability to secure $2.50 a gallon prices. He also decried President Barack Obama’s administration with the following:

“If you want $10-a-gallon gasoline, an anti-energy secretary and weakness requiring us to depend on foreigners for our energy, Barack Obama should be your candidate.”

To briefly deconstruct Gingrich’s assertions one can easily realize he is simply making outlandish promises as a last ditch effort to appease voters. First off, the United States is already unequivocally dependent upon foreign oil. In 1998, our net imports of crude oil, measured in number of barrels, surpassed our domestic production and has remained that way ever since. As of right now, 49 percent of our gasoline consumption comes from net imports, which certainly describes a state of dependence. Similarly, if you work as a car dealer and 49 percent of your income comes from commissions made on sales, then losing this stream of income would drastically impact your finances.

Moreover, on his claim of $10-a-gallon gasoline prices, the U.S. Energy Information Administration projects gas prices will remain less than $5 through December next year. Gingrich’s scare tactics are a desperate attempt by a candidate who obviously sees his prospect of winning the nomination as dwindling.

The candidate who actually surmised the most intelligently on the topic was Mitt Romney, when he said, “I think people recognize that the president can’t precisely set the price at the pump.”

In actuality larger forces than the commander in chief impact the price of gasoline. In January, more than 75 percent of the price paid at the pump went to pay for the costs of crude oil. The remaining went to marketing, taxes and the refining process. The most significant factor affecting the overall price at the pump is the price of crude oil, and numerous factors affect this price.

The economic forces of supply and demand have an intimate relationship with the price of crude oil. On the demand side, economic growth on a global level regularly increases the demand for crude oil, as development in foreign countries correlates to a growing demand for crude. This is currently occurring in places such as China, India and Brazil. Conversely, in regards to the supply side, a powerful actor known as “OPEC” exerts true power. The Organization of Petroleum Exporting Countries produced 43 percent of the world’s supply of crude oil in 2010, and in the past have enforced production limits on members. The EIA summarizes this supply side power of OPEC: “OPEC countries have essentially all of the world’s spare oil production capacity and possess about two-thirds of the world’s estimated crude oil reserves. Oil prices have often spiked in response to disruptions in the international and domestic supply of crude oil.”

Other factors impact the price as well. Seasonality regularly changes the price of crude, with the highest prices coming during the summer months. Likewise, a weakened buying power or a weak dollar makes acquiring barrels more costly, which in turn can lead to high prices at the pump for consumers. Another major impact is the role of speculators, which is something Obama has attempted to regulate. Last April, Obama formed a task force aimed to investigate oil and gas speculation and the potential instances of fraud or manipulation in the role of making prices jump. The effectiveness of his task force is certainly questionable, as they have only met four times in the course of a year, but it is certainly not the picture Gingrich paints.

These actions are one of the major dangers of election pandering. Gas prices are complex, involve numerous factors and cannot solely be attributed to the actions of the president. Yet when a candidate attempts to distort this reality and place the entire blame on the current administration, voters tend to believe them.

For complete disclosure, when former President George W. Bush was inaugurated in January of 2001 the average price in California was $1.62 a gallon. The peak price of his tenure was in the summer of 2008 when this price crossed more than $4.59 a gallon. Obama has witnessed similar volatility: $2 when he was inaugurated to $4.46 last week. From these numbers, it’s clear that neither political party can stump on a record of keeping prices down.

Additionally, neither party can attribute the entire blame on the other party’s administration. Unlike the frenzied news media, gas prices cannot solely be controlled by a single politician’s talking points.