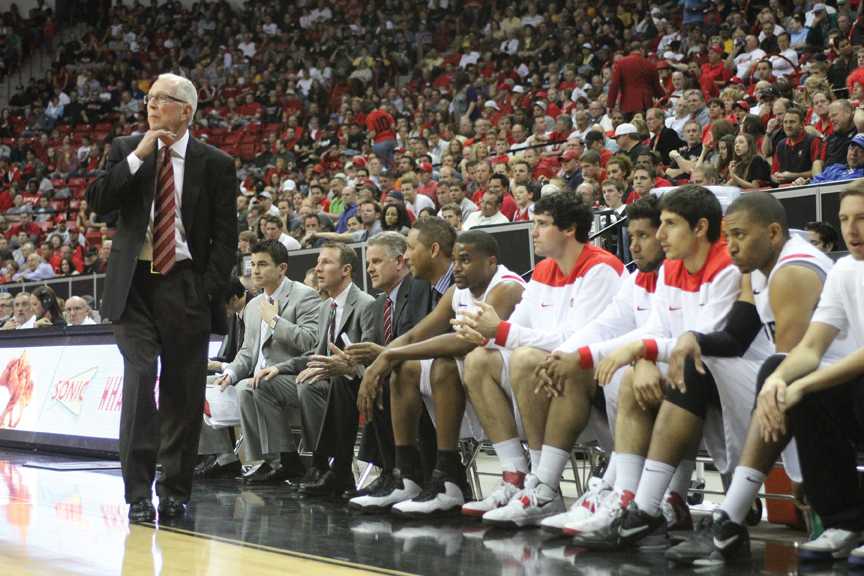 NC State made good on its advantage in the low post and outscored SDSU 38-18 in the paint on Friday. | Antonio Zaragoza, Photo Editor

The sport of college basketball is a cruel one, especially in the month of March. More than 30 games of blood, sweat and tears can evaporate into thin air within the span of 40 minutes.

The death of a season can almost feel like a drive-by shooting, it happens so fast and it’s so unexpected. On Friday, North Carolina State was the bullet the San Diego State men’s basketball team couldn’t dodge.

NC State rode Richard Howell, its hot shooting and its advantage in the paint for a 79-65 win against SDSU.

Howell made 10 of his 12 shot attempts and scored 22 points. The Wolfpack shot 58.5 percent as a team, including 65.4 percent in the second half.

But the majority of the damage against the Aztecs was done in the paint. NC State outscored SDSU in the paint 38-18. The Wolfpack’s size advantage was apparent early on when sophomore forward CJ Leslie was dunking as if nobody was defending him.

All of those stats were the ingredients needed to end the Aztecs’ surprise season. The loss put the team’s final record at 26-8, tied for the second-most wins in a season in school history.

Size and length hurt SDSU this season and NC was plenty tall and plenty long. The Aztecs tried their best to match up with the Wolfpack, but it wasn’t enough.

It was 33-29 at halftime but NC State wore down SDSU in the second half with 22 points in the paint.

Head coach Steve Fisher said there was more to the Wolfpack than size, though.

“It’s one thing to be big,” Fisher told the media after the game. “It’s another thing to be big and good. And they’re big and good … We were aware they were going to pound the ball in early and often. They did it and we weren’t quite capable of repelling them.”

The Aztec big men didn’t enjoy their best games. Senior forward Tim Shelton, who was playing in his final game, was plagued with foul trouble. He grabbed two rebounds while failing to score. Senior center Garrett Green, who was also playing in his last collegiate game, went 1-for-4 from the field and scored two points.

The shooting for SDSU in the last two games of the season was pretty similar: poor.

After struggling against New Mexico, the Aztecs couldn’t find their shot again against the Wolfpack.

SDSU shot 37.7 percent from the field and 34.8 percent from three. Those numbers seem miniscule when compared to the 58.5 percent shooting effort of NC State.

Junior guard Chase Tapley did manage to heat up in the second half, though. Tapley was held scoreless in the first half, but scored 19 points in the final half to keep the game somewhat close.

SDSU will lose Shelton and Green, but will add so much more. One of, if not the best recruiting classes in school history is expected to arrive on Montezuma Mesa in the fall. The likes of Winston Shepard, Matt Shrigley and Skylar Spencer are all slated to be Aztecs in the fall.

Three transfers are scheduled to join those freshmen next season, too. Sophomore forwards JJ O’Brien and Dwayne Polee are going to be eligible for SDSU at the start of next season, while redshirt freshman James Johnson will be eligible for the Aztecs at the midway point of the season.

After playing with house money this season, expectations will be high for SDSU from the start of the very first preseason practice.

With everybody besides Shelton and Green scheduled to return, it has the potential to be the best SDSU team Fisher has ever coached.