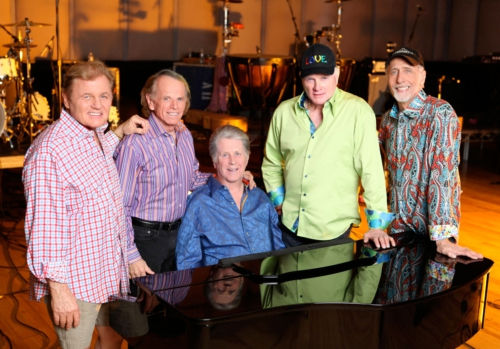 There was a time when Southern California could be defined by one of the most iconic rock groups of all time: The Beach Boys. Once again, the time has come for the Hawaiian shirted musicians to represent the surf and the beaches they sung about back in the 60’s—and this time, in honor of their fiftieth anniversary, they’re touring with a 42 song setlist. You only turn 50 once.

The Beach Boys have had numerous line-up changes, fill-ins, and versions of the band since its incarnation in 1961, but for the first time since 1996 the line-up will include Brian Wilson, whom Rolling Stone magazine has dubbed “the band’s troubled heart”. This is a pretty big deal for Beach Boys fans, being that Wilson is considered the band’s principle songwriter, writing or co-writing more than two-dozen Top 40 hits.

Their current members are: Wilson, his cousin Mike Love, Al Jardin, Bruce Johnston and David Marks. Wilson, Love, and Jardin are founding members of the band, a long with Wilson’s brothers Dennis and Carl, who have both passed away. Johnston and Marks are not founding members, but have played with the Beach Boys during their many line-up changes as early as 1962.

Rolling Stone reports that the Beach Boys’ 42-song setlist is two and a half hours long—not bad for some sixty year-olds who are beginning to push seventy.

And what’s even better is that they’re playing in Chula Vista on May 25th at the Cricket Wireless Amphitheater. By then finals are well done and over with, the sun is bright, and the beaches become hang out spots for many—they couldn’t have come at a better time.

However, The Beach boys weren’t all about surfing; in fact, only Dennis Wilson, the original drummer for the group, was the only member who actually surfed. Pretty ironic, considering the band can be tagged as “surf rock”. But there’s a deeper side to the Beach Boys, particularly Brian Wilson’s songwriting and experimentation with music, his most notable creation being Pet Sounds and Smile, the latter of which was delayed because of Wilson’s growing mental illness as well as several other factors. It’s this side of the Beach Boy’s that is most iconic and mysterious about them, and isn’t really widely known.

The tour is set to hit over 60 cities. And, for funsies, here’s the setlist.

“Do It Again”
“Catch A Wave”
“Don’t Back Down”
“Surfin’ Safari”
“Surfer Girl”
“The Little Girl I Once Knew”
“Wendy”
“Then He Kissed Me” (Phil Spector/The Crystals)
“This Whole World”
“Why Do Fools Fall in Love” (Frankie Lymon and the Teenagers)
“When I Grow Up (To Be a Man)”
“You’re So Good to Me”
“In Them Old Cottonfields Back Home”
“Be True to Your School”
“Disney Girls”
“Please Let Me Wonder”
“Don’t Worry Baby”
“Little Honda”
“Little Deuce Coupe”
“409”
“Shut Down”
“I Get Around”
“Sloop John B”
“Wouldn’t It Be Nice”
“Forever”
“Sail On Sailor”
“Heroes and Villains”
“In My Room”
“All This Is That”
“God Only Knows”
“That’s Why God Made the Radio”
“California Dreaming” (The Mamas and the Papas)
“California Girls”
“Dance Dance Dance”
“All Summer Long”
“Help Me Rhonda”
“Rock and Roll Music” (Chuck Berry)
“Barbara Ann”
“Surfin’ U.S.A.”