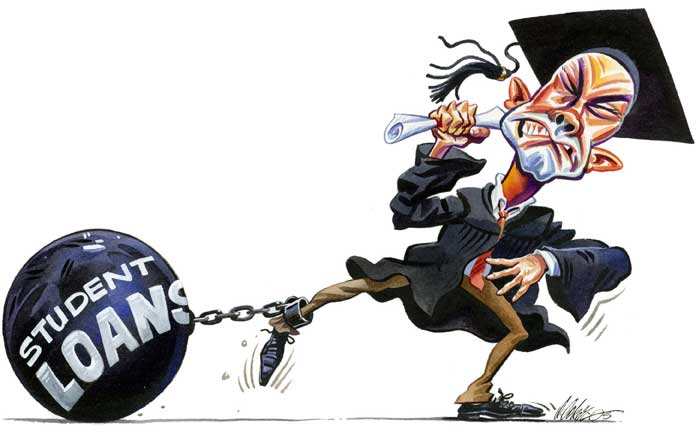 The student loan wars are at their climatic height. In 2007, Congressional Democrats, along with former President George W. Bush, approved a bill that progressively cut interest rates on federal student loans in half, from 6.8 to 3.4 percent. It also froze in these rates for a period of five years. This summer brings the end of that five-year period, and rates will double unless legislative inaction is deemed too damaging to the election prospects of either party. With the end date approaching, a simple question is inherently asked: Would a pissed off block of young voters come back to haunt your party in November for failing to take action?

The most recent discussions are a reaction to President Barack Obama’s multi-university tour speaking on behalf of a continued freeze on interest rates. His speeches have brought a renewed interest from the entire political spectrum on the issue. As recent as this past week, competing plans from both parties were presented in the House of Representatives to freeze rates. The differences in the plans are the sources of funding to extend the rates of 3.4 percent, which will cost $6 billion per year.

In the Democrats’ plan, the source of funding to offset the extension of interest rates is a sensible source: reducing tax subsidies for big oil companies. This past March, Obama discussed these tax subsidies when trying to drum up support for the “Repeal Big Oil Tax Subsidies” bill that ultimately failed. He said,“Last year the three biggest U.S. oil companies took home more than $80 billion in profits. Exxon pocketed nearly $4.7 million every hour. And when the price of oil goes up, prices at the pump go up, and so do these companies’ profits.”

For the “world’s most profitable corporation,” Exxon Mobil, these tax subsidies enabled significant reductions to its overall tax burden. According to the Center for Tax Justice, Exxon Mobil paid an effective rate of 13 percent, or roughly a third of the 35 percent corporate tax rate. Thus, one can reasonably conclude that reducing tax subsidies for oil companies, which are grossing billions of dollars annually and are not in urgent need of a subsidy, is a sensible source to offset the student loan interest rate extension.

Meanwhile, the Republicans’ plan aims to take the ax to Obama’s health care act to account for the $6 billion, significantly gutting The Prevention and Public Health Fund. The fund’s vision “is intended to promote wellness, prevent disease and protect against public health emergencies” and it aims to achieve this through providing screenings for cervical cancer, breast cancer and immunizations for newborn babies.

So the Democrats aim to reduce loopholes that permit private enterprise to pay a lower rate than legally responsible, while the republicans would cut essential services for women and children. For Republicans, it’s a good thing they don’t need “the women’s” vote come November. Oh wait, they do.

The Republican plan is a truly depressing political moment that can only be described as shameless pandering. Many House Republicans backed Paul Ryan’s budget plan, which includes doubling student loan interest rates, as recently as last week. Ryan, the chief executor of education, also wants to reduce the eligibity for Pell grants, which would impact the ability of many low-income students to pursue their educations. The Republican plan for student loans is merely a faćade for attacks on Obama’s health care act, a further manifestation of their pious class warfare agenda. It would be considered incendiary tactics if made against them. The spontaneity of their attention on the issue is a blatant political move. Unlike attacks on women, Republicans do realize they cannot afford to disenfranchise the “youth” vote. This explains the abrupt about-face.

Political agenda aside, the interest rates of 3.4 percent should be extended, and the $6 billion must be considered and accounted for in the process. Our government must practice fiscal integrity, where spending can only happen if the budget allows such actions to take place. With this in consideration, I have a solution that will appease both the Republicans and Democrats. No matter the sensibility of the proposed cut (corporate tax subsidies) or the absurdity (The Prevention and Public Health Fund), both can remain intact as is. The source of the cuts should be our global military presence.

The various options for trimming the fat off the defense budget are like the menu of flavors at Baskin Robbins. There is no shortage of sources, but the one in direst need of reduction is our number of troops abroad. We simply cannot afford to station troops in peaceful, allied nations to our current extent and expect to put these costs on the back of taxpayers. As of December, we had 53,526 troops stationed in Germany; World War II ended more than 66 years ago and the Cold War has been history for more than 20, rendering our presence entirely unjustifiable. A partial list of nations where we should significantly, if not totally, “withdraw”: United Kingdom (9,317 troops), Japan (36,708 troops), Italy (10,817 troops), Belgium (1,207 troops) and Spain (1,481 troops).

We currently spend $102 billion annually to maintain 865 bases abroad, including 227 in Germany. That works out to more than $117 million spent per international base. Billions could easily be saved with the closing of many of these bases. Furthermore, these cuts will have an immediate impact upon The Overseas Cost of Living Allowance under the defense budget. This serves as “a non-taxable allowance designed to offset the higher overseas prices of non-housing goods and services. Approximately $2 billion is paid in Overseas Cost of Living Allowances annually.” Trimming $6 billion from the defense budget would not impede our ability to achieve our strategic goals. That is less than 2 percent of the entire defense budget.

Regardless of what is cut to offset the freeze of interest rates, the entire ordeal will be utilized for political gain in the near future. The temporary freeze has delivered the ability for either party to claim a major victory through taking action, in order to opportunely “correct” the problem in an election year. Get ready to hear that each party is the champion for student interests, as any action will inevitably be utilized as fodder for the campaign résumé. Fortunately with champions such as Ryan in the party, it’s clear the Republicans are not the party with student interests at heart.

—Brody Burns is seeking a Master’s in Business Administration.