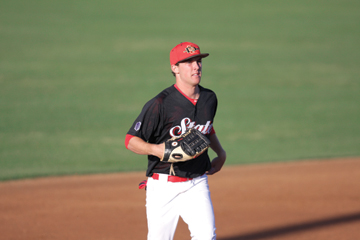 The Aztecs’ home opener on Sept. 8 against Army will kick off at 4:30 p.m. and will be on NBC Sports Network.

SDSU will take on the newest member of the Mountain West Conference, Hawaii, at 5 p.m. at Qualcomm Stadium for the annual KGB SkyShow game on Oct. 6. The game will be televised on CBS Sports Network.

On Oct. 20, the Aztecs will play Nevada at 7:30 p.m.; the game will be televised on CBS Sports Network as well.

The home finale for the Aztecs will be against Air Force. The game will be televised on NBC Sports Network at 12:30 p.m.

Last Thursday, SDSU sophomore Hayley Miles was honored by being named to the 2012 Capital One Softball Academic All-District Team, by the College Sports Information of America.

Miles earned first-team District 8 honors. The sophomore was the only player from the Mountain West Conference to do so.

The journalism major holds a 3.6 GPA. She is the first Aztec to be named to the Academic All-District team since Brittany Knudsen was honored with second-team distinction in 2010.

For Mattera, who just finished his 19th season on campus, it was the second time he earned the honor. He also won the award in 2003.

The San Diego State baseball team drubbed UNLV on Saturday 9-2. The Runnin’ Rebels scored the first run of the game, but after that SDSU poured it on.

The Aztecs scored six runs combined in the second and third innings and added three more runs in the fifth inning.