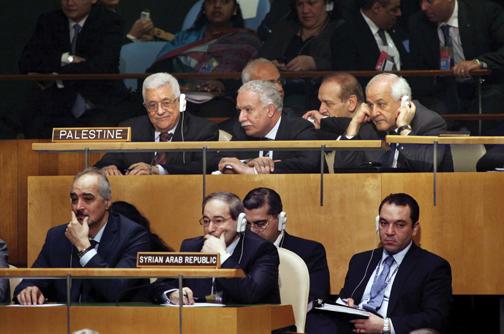 Last Thursday, Palestine was granted non-member observer state status in the U.N., with 138 of 193 member states voting in favor of a resolution to recognize the Middle-Eastern country, despite protests from Israel and the U.S.

While Palestine, whose legitimacy has been disputed in a long conflict with Israel, has yet to achieve full membership in the U.N., the new status will give Palestinians the legal means to challenge Israel’s occupation of the West Bank, according to The New York Times.

For the Palestinian Authority, the Ramallah-based provisional government, which controls parts of the West Bank, the status upgrade is a step toward full statehood.

“We did not come here seeking to delejitimize a state established years go, and that is Israel,” Palestinian Authority President Mahmoud Abbas said in an address to the U.N. General Assembly. “Rather, we came to affirm the legitimacy of the State that must now achieve its independence, and that is Palestine.”

The recognition, however, prompted strong reactions from the Israeli-American alliance.

“There’s only one route to Palestinian statehood,” Israel’s ambassador to the U.N. Ron Prosor said. “That route runs through direct negotiations between Jerusalem and Ramallah that will lead to a secure and lasting peace … there are no shortcuts. No quick fixes. No instant solutions.”

U.S. ambassador Susan Rice’s comments echoed the sentiment that the change in status was merely symbolic. “Today’s grand pronouncements will soon fade,” Rice said. “The Palestinian people will wake up tomorrow and find that little about their lives has changed, save that the prospects of a durable peace have only receded.”

The New York Times reported Palestine’s recognition is a worry for Israel because membership in the U.N. would allow the Palestinians to join the International Criminal Court, where it is feared they will pursue an investigation of Israel’s military conduct in occupied areas.

Members of the General Assembly stressed the importance of continued peace talks between Israel and Palestine.

“We must give new impetus to our collective efforts to ensure that … a viable State of Palestine lives side by side with a secure State of Israel,” U.N. Secretary-General Ban Ki-moon said. “I urge the parties to renew their commitment to a negotiated peace.”

The campaign for recognition began in 2011 when the Palestinian Authority lobbied the U.N. for full membership. The bid was blocked by the U.N. Security Council.