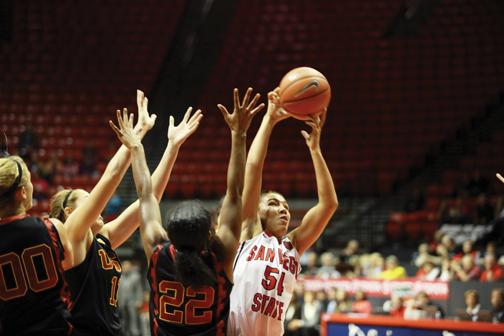 The San Diego State women’s basketball team showed the University of Southern California no mercy last Friday night when it defeated the Trojans 80-46.

The Aztecs battled USC to lead the game in the first few minutes of the first half. But the Trojans prevailed and slowly stole the lead for the first and only time of the entire game.

“We weren’t going to let there be any questions today. We wanted to come out and get ahead right away and punch them in the mouth like Coach Burns said. That’s what we did,” Clements said. “We didn’t let them come back and we didn’t let up and that’s why we won the game.”

SDSU continued to hold onto the lead for the rest of the first half, while the Trojans fought hard and tried to use their speed to catch up to the Aztecs.

With 16 seconds left in the first half, Clements hit a 3-pointer that gave SDSU a comfortable 14-point lead going into the locker room.

“Our offense flows from our defense,” SDSU head coach Beth Burns said. “We are not extremely fast, but we are big and we are strong and if we can defend and rebound, then we can get out and transition and get out in
the space.”

The Aztecs went into the second half determined to maintain their lead. As the point gap increased, it was clear the USC offense couldn’t handle the pressure from the SDSU defense.

With 22 seconds left in the game, sophomore forward Erimma Amarikwa made a jump shot that gave the Aztecs a 34-point lead to seal the win.

SDSU is now 4-2 overall this season and the Trojans have now slipped down to 3-3.

The Aztecs shot 46 percent from the field and made 10 of the 18 free throws they attempted.

Clements led the team with 25 points, making this her third game scoring 20 points or more this season.

“Really, every day my goal is to play as hard as I can and to play the best defense I can. I don’t really focus on scoring,” Clements said. “I’m a scorer, so I’m going to score—that’s natural for me. And some games you just miss shots, but if you play defense every game you win games regardless of whether you score or not, so that’s really my focus every game.”

SDSU held USC to 32 percent shooting from the field; however, the Trojans managed to make eight of the 12 free throws attempted.

On Wednesday, the Aztecs will be in Seattle preparing to face off against the University of Washington Huskies at 7 p.m.

“Whatever Washington does, we just have to make sure that we execute and we play good defense, and I think we will be all right,” Clements said.