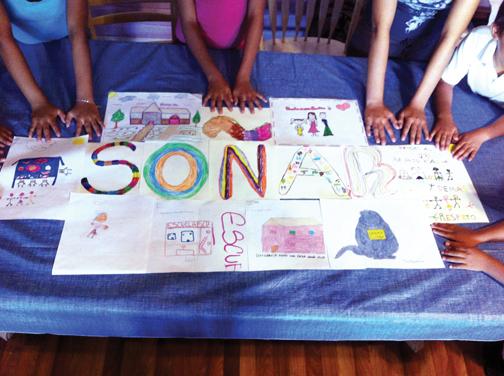 Members of the Youth Empowerment Program at San Diego State will begin to work as mentors for undocumented children that migrated to the U.S. unaccompanied.

Each year, children, mostly from Mexico and Central America, travel to the U.S. without a parent or a guardian. In October 2011 through April, the U.S. Border Patrol apprehended 13,416 unaccompanied minors.

“They’re crossing two different borders at times, so they’re faced with a number of traumatic events to get to the U.S.,” SDSU social work graduate student and co-founder of Y.E.P. Leticia Rodriguez said. “Once they are here, they’re deemed undocumented, so that comes with a host of issues.”

Within 72 hours of being apprehended and processed by the Department of Homeland Security, the U.S. Department of Health and Human Services Office of Refugee Resettlement places the youth in shelters while their legal cases are processed.

Through its Unaccompanied Minors Shelter Programs, Southwest Key provides counseling, legal and medical services, and an on-site school for children while their legal cases are resolved, according to Southwest Key’s website.

The members of Y.E.P., who will meet with the youth once a week, will produce a monthly newsletter and a resource list for the main cities where children are often placed. The list of resources includes information about food banks, community housing, public libraries, free community clinics, community colleges and transportation, Kennedy said.

The group will also execute an eight-week curriculum meant to complement the on-site education the children receive. The lesson plans will focus on future career and educational goals.

“Through the different lesson plans and activities, we are attempting to empower the youth,” Rodriguez said. “Even if it’s a little sense of hope that they are able to be successful in this country or wherever it may be, that’s what we want.”

The intended length of stay for children at the shelters is 45 days, while legal decisions are made for children to be reunified with family in the U.S. or their country of origin. It is also possible for a child to be placed in foster care or to “age out” at 18.

Rodriguez says it may be difficult to build intimate relationships with the children because of their stay at the shelter.

“This is something we’ve talked to our members about—establishing that boundary,” Rodriguez said. “You create a close bond and a mentor relationship with (the children) and then all of a sudden, they’re not there anymore. You created all these goals, you put so much work and you’ve received so much from working with that person that it really breaks your heart.”

Rodriguez hopes the program will not only make an impact at the shelters, but on campus as well.

“I think a lot of people don’t know what happens to the kids that come to the U.S. unaccompanied,” Rodriguez said. “They’re an invisible population.”

Social work freshman Jasmin Zafra says she was inspired by the program and is excited to work with the children.

“We got a tour of the shelter … and we didn’t get a chance to talk to them, but you could really see the kids had a lot of heart,” Zafra said. “I can’t wait to get to know them more.”

Y.E.P. expects to become a recognized student organization by the end of the semester and recruit more volunteers.

“This is a great opportunity for all students to get involved with,” Rodriguez said. “It’s why I decided to get a masters in social work. It shaped my career path.”