‘Creed’ sneaks its way onto PC 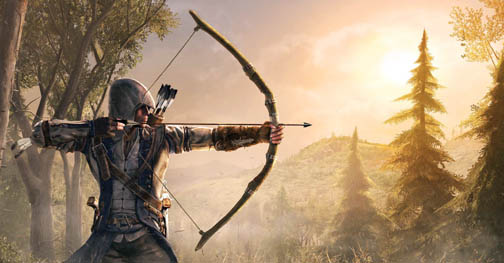 The latest in the blockbuster Assassin’s Creed franchise has finally been released for PC and in the nick of time, too, as my Ezio “The Most Interesting Man in the World” Auditore withdrawals were starting to get fierce. However, Ezio has been replaced with a new face: Connor (or as I like to call him, “stereotypical stoic Native American man”). Fear not, however, for “Assassin’s Creed III” is still a fantastic game, if slightly less fun than the previous jaunts into the Animus.

Modern-day assassin Desmond and pals continue their journey to try and stop the mischievous plots of the Templars in present-day New York, forcing them to once more dive into the memories of assassins past to unlock the final secrets they need to stop such evil deeds. Oh, and to stop the sun from turning Earth into charcoal, too.

This time, players take part in the American Revolution as a half-Native American named Connor, as his father in the beginning of the game, and as child Connor after that while periodically popping out to play as Desmond.  It makes more sense in-game, I promise.

While the story was quite well done, with a few twists and turns unparalleled in the franchise, I couldn’t help but feel disconnected from Connor. Maybe I am spoiled with my adventures as Ezio, or maybe getting to play as the suave Englishman Haytham Kenway (Connor’s father) in the beginning hampers Connor’s experience. Throughout the main story, Connor is either stoic and quiet, or screaming and angry. You only get a deeper look at Connor if you invest in the homestead side quests, and even then it never goes very far below the surface.

Taking part in historic battles such as Lexington and Concord and hanging out with George Washington sounds great on paper, but in practice I was a little disappointed. I expected more of a focus on the revolution, because it is such a historically rich period, but Connor spends a lot of time on other adventures, like running through trees and beating up bears. Also, the bland setting of Colonial America simply doesn’t compare to the grandeur of prior locations in Jerusalem, Italy and Constantinople.

This said, you might think I was rather disappointed in the game, which is far from the truth. The gameplay is the best the series has seen yet, with fighting more brutal than ever before. I was mesmerized by the seemingly countless different combat animations, all crisp and intense. New tools such as pistols and rope darts introduce many new exciting attacks as well.

Graphically, the game is gorgeous, with some of the best facial animations I’ve seen on console-level graphics engines. Building a cadre of fellow assassins was a real treat, especially with all the new tricks they’ve been taught; creeping toward a target with six other assassins at my back looks incredibly intimidating and made me feel like an absolute badass.  Most surprising of all, the naval combat side quests were some of the most fun I’ve had in years; I sincerely hope one of the DLCs is set at sea, if not a whole game. I haven’t even touched on the extensive multiplayer experience either.

In a nutshell, “Assassin’s Creed III” is definitely worth the price of admission. However, when so much of the game is superb, the flaws become more glaring. With a main character who is hard to connect to and a world suffering from numerous missed opportunities to energize an otherwise somewhat boring setting, the story quality suffered. A shame, given how well done the rest of the game is. Regardless, fans of the Assassin’s Creed series will not be disappointed in this title, so hurry up and start killing some Templars.