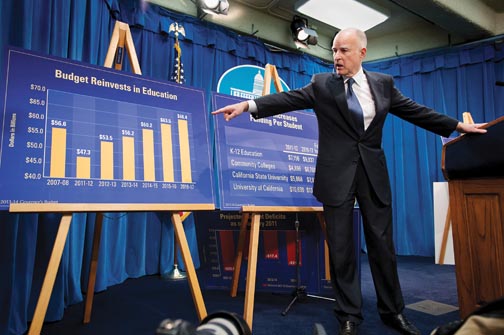 Gov. Jerry Brown plans to add approximately $125 million into state funding for the California State University system. In conjunction with Proposition 30, the proposed budget will also reinvest the $125 million cut from last year’s budget into this fiscal year.

After the proposed budget increase, CSU state funding will provide $2.2 billion for operational costs and establishment of programs.

The CSU system has 23 campuses and an approximately 410,300 students, making it the largest and most diverse university system in the U.S. CSU schools produce more than half of the state’s bachelor’s degrees and one-third of the state’s master’s degrees.

According to the governor’s Budget Summary for 2013-14, the $125 million increase for the CSU system will be added to the general fund for “core instructional costs” and the extra funding should eliminate the need for further tuition hikes.

The funding will include $10 million intended to increase the number of courses available to undergraduates through enhanced courses. These resources will be allotted to required lower-division general education courses, major prerequisites and high-demand classes.

Media Relations Specialist Erik Fallis said in a press release  that the funds will allow for a new approach for mass student success by including increased use of technology for learning, student advising and course restructuring.

The additional $125 million increase will be added to the General Fund because the CSU system did not increase tuition in the 2012-13 budget year.

The proposed budget states the importance of reinvestment in education in order to ensure “access to high-quality, post-secondary instruction; improve educational attainment; and support civic engagement and critical thinking.”

In a press release, CSU Chancellor Timothy P. White spoke about the funding.

“The CSU has certainly been challenged over the past several years with the drop in state support due to the state’s lingering recession,” White said. “However, with finances more stable in the near term now that Proposition 30 has passed, we are cautiously optimistic that the CSU’s budget will turn around.”