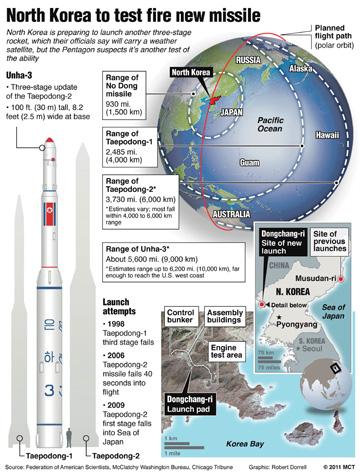 A statement released by the North Korean National Defense Commission on Thursday declared the U.S. a target to long-range missiles and high-level nuclear tests. The public statement also said “the century-long struggle against the United States” will not stop North Korea from targeting its “sworn enemy, the United States,” according to NPR.

According to The New York Times, the statement was a rebuttal to the U.N. Security Council’s disapproval of North Korea’s recent rocket launching.

This is the first proposed missile threat from North Korea’s newest leader, Kim Jong-un. The statement may be indicative of Jong-un’s intentions to uphold his father’s standards for North Korea.

American intelligence officials stated that with the currently known technology, missiles could only reach Hawaii, but in three or more years, may be capable of traveling as far as the continental U.S.

North Korea performed three previous missile tests in 2006, 2009 and 2012, all of which were unsuccessful. According to the BBC, North Korea successfully tested a fourth rocket on Dec. 12, 2012.

The day after the initial threat, North Korea warned that if it joined South Korea the U.N. sanctions regime against the missile testing, “physical countermeasures” would be taken against the South.

According to the BBC, North Korea is suspected to possess more than 1,000 missiles that could be used in a potential attack against the U.S.

According to The New York Times, a White House official dubbed the threat as “needlessly provocative,” saying further threats would lead to increased seclusion for North Korea.