Killing is not the answer to bison expansion 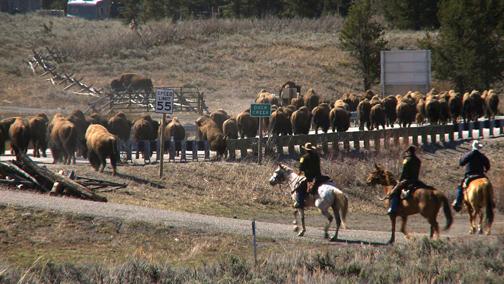 The American bison and the bald eagle are two animals emblematic of the U.S. Yet, both were almost exterminated from the country because of egregious human behavior. Their population has recovered but the bison finds itself threatened again—this time by Montana politicians.

The Montana state legislature is considering two bills designed to destroy any bison found inside state lines. Montana must not pass either bill until other alternatives have been explored first. Montanans say bison are ripe for extermination for the following reasons: bison were already exterminated from Montana once, bison ought to be considered disease-carrying pests and bison are dangerous to humans. All three reasons couldn’t be more wrong.

The Montana Farm Bureau Federation reports bison are considered extinct in Montana. While it’s technically correct, approximately 400 bison live in Montana’s National Bison Range. Even so, indiscriminant killing of any bison crossing from Wyoming’s Yellowstone National Park is ludicrous. This argument would only be valid if bison disappeared because of natural selection. Instead, bison were exterminated as a result of the mistaken belief that humanity can do whatever it wants. We have a responsibility to share this planet with all species. Species eradication should result only from its inability to adapt to natural environmental change, or from naturally occurring disease.

This leads us into the second bizarre reasoning behind Montana’s bison bloodlust: The bison in question carry disease. Park officials say less than half of Yellowstone’s bison test positive for brucellosis. The disease is contagious and can be transmitted to humans. Its symptoms are nasty, ranging from fever to joint pain. Once contracted, the disease can last for years. Luckily, humans rarely contract brucellosis. The U.S. National Library of Medicine stated only 100 to 200 humans are diagnosed each year. In other words, it’s not worth worrying about. If brucellosis is the menace the anti-bison faction wants society to believe, Montana must slaughter all known brucellosis carriers, including cattle, pigs and—wait for it—dogs. Montana state legislators would never consider mass canine euthanasia, yet they seemingly can’t wait to shoot bison.

Anti-bison Montanans go to great lengths to portray bison as life-threatening. Admittedly, bison do present an imposing stature. Bulls can weigh 2,000 pounds and can run close to 30 mph. Fear of the bison is so serious, one Montanan erroneously testified metal pens had been erected to keep school-aged children safe as they wait for school buses. The children can stay in the pens, because the bison need somewhere to roam other than in just a patriotic song. We need to stop crying about indigenous animals doing what comes naturally to them. For example, I frequent Yosemite with the understanding that it’s the home to black bears. If it’s the home to black bears, then it’s not my home. Therefore, a black bear shouldn’t be killed if it attacks. The same applies to a Californian building a home in a mountain lion’s habitat. Naturally, a mountain lion sees us and our pets as food. It’s our responsability to be smart enough to not get eaten.

Montana is an especially large state with an especially small population. It’s absurd to think that bison and humans cannot co-exist there. If a Montanan is truly afraid of the bison, let the Montanan move to New York City. There, a bison will be the least of their worries.

Some might dismiss my argument, and think that I’m against all hunting. However, I’m not. I grew up with hunting as part of my life. There’s nothing wrong with responsible hunting. Educated hunters appreciate the balance between nature and man. Even though Montana has a bison-hunting program, there’s no balance to it. The bison population doesn’t have allowable non-federal, non-tribal land anywhere inside the state. Because of this, Yellowstone biologists recommend killing 450 bison because the park is too small to sustain what is estimated to be 4,200 bison living there. Montana is ideal for removing the strain on Yellowstone by allowing bison to migrate there. In fact, proposals to do so are already underway. Montana politicians must let those plans be exhausted before they allow increased bison hunting.

Americans responded when the bald eagle faced man-made extinction. Only time will tell if Montanans will similarly do the right thing with the bison. If it doesn’t, the image of a bison’s skull on its state quarter is appropiate.