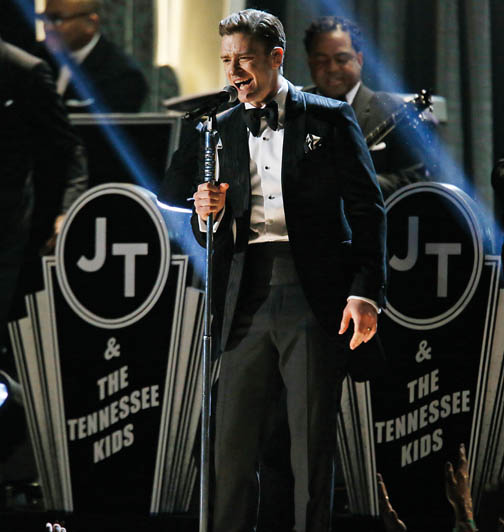 It was an unpredictable Sunday night full of talented musicians, awards and style at the 55th Annual Grammy Awards, held on Feb. 10 at the Staples Center in Los Angeles.

The red carpet was packed with some of the biggest stars in Hollywood, all decked out from head to toe and looking their best. Girls were swooning left and right when Justin Timberlake made an appearance wearing a classic black suit and bow tie.

Despite the new dress code policy imposed by CBS Program Practices, some celebrities managed to push the envelope, such as Kelly Rowland, who went for a daring-diva look wearing a black dress with large cutouts. Katy Perry also turned heads in her mint green Gucci dress with a dramatic plunged neckline. But despite the number of beauties on the red carpet, many argued Rihanna was among the best dressed of the night in her romantic and feminine long, red gown.

Taylor Swift opened the show with a strange, but memorable performance of “We Are Never Ever Getting Back Together.” Swift dressed in an elaborate costume as the Mad Hatter during this circus-style song. Her performance also included a troop of mimes and a man on a tricycle with a flamethrower attached.

There was also an element of tension in the venue as artists competed for various awards. Frank Ocean beat rival Chris Brown in the category of best urban contemporary album. Brown, who had a scuffle with Ocean last month, was a sore loser and remained seated as Ocean walked to the stage during a standing ovation.

Fun. claimed major awards including song of the year for its hit anthem “We Are Young” and best new artist, causing something of an upset for Ocean. Fun.’s lead singer, Nate Ruess, said he honestly didn’t think it was going to win that category because the band was against amazing artists such as Frank Ocean, Hunter Hayes and The Lumineers.

Dan Auerbach of The Black Keys was the night’s top winner with four trophies, including producer of the year and three rock category victories. The ceremony ended with a bang as London folk rockers Mumford & Sons wrapped up the show with what was considered one of the most surprising wins of the night, taking home album of the year for “Babel.”

See below for a full list of this year’s Grammy winners.

Record of the year: “Somebody That I Used to Know,” Gotye feat. Kimbra

Rap/sung collaboration: “No Church in the Wild,” Jay-Z and Kanye West, feat. Frank Ocean and The-Dream

Pop/duo group performance: “Somebody That I Used to Know,” Gotye featuring Kimbra

Hard rock/metal performance: “Love Bites (So Do I),” Halestorm

Children’s album: Can You Canoe?, The Okee Dokee Brothers