Mayor Filner opens his door to the public 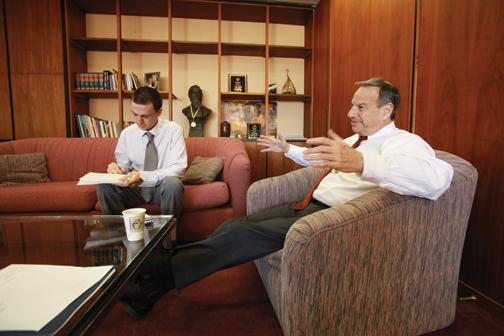 Just three months into his first term as mayor of San Diego, Bob Filner has been anything but quiet in his role as the city’s highest elected official. He has made headlines not only for his policy decisions—which include ending traffic light photo enforcement and opening an office in Tijuana—but also for his contentiousness.

Last month, Filner confronted City Attorney Jan Goldsmith during a press conference, which led to a heated quarrel in front of news cameras.

But Filner has also drawn attention for his open-door approach with the public. In February, he held a Saturday morning meeting downtown in the lobby of City Hall. The event was designed to give citizens a chance to speak with the mayor directly.

Filner told The Daily Aztec that maintaining visibility and openness of government is important to him.

“You’ve got to make sure people know that they can see you,” he said, adding that many citizens have the sense that elected officials are off limits to them. “Actually, it’s not true, but that’s what they think, so I figured, ‘I’ll just go to the lobby and have coffee and donuts and invite people in.’”

The event drew scores of San Diegans eager to share their questions, concerns and opinions with
the mayor.

The first meeting gave more than 100 people the opportunity to meet with Filner and some had to wait in line for approximately three hours.

In one memorable encounter, husband  and wife gym owners complained that the city was shutting down their operation because of code enforcement issues.

“They were literally in tears, because they were about to lose their business, which is their whole life,” Filner remarked. “Now, there’s always two sides to this and I didn’t know what the other side was, so I said, ‘Look, I’m going to look into this further, but we’re going to give you some breathing space.’”

Filner said an advantage of his mayoral powers is that he does not have to go through a city manager or other avenues to take actions.

“I can solve problems almost on the spot,” he said.

The mayor plans to continue holding public meetings on the first Saturday of every month as part of an effort to maintain transparency in local government.

Filner came to San Diego in 1970 to teach history at San Diego State. Though he left the school in 1992 to run for Congress, he was eager to answer a few questions from SDSU students, who submitted their concerns to The Daily Aztec via Facebook
and Twitter.

“What is your position on the assault weapons ban,” asked SDSU alumni Alejandro Renteria. “I’m strongly for the ban,” Filner said, who was in Congress in 1994 when the original federal Assault Weapons Ban was passed. “I mean, there’s no place for that in our (society)…nobody needs assault weapons for whatever the Second Amendment protects.”

Filner believes he practices “creative tension,” a concept he learned from Martin Luther King Jr. as a civil rights activist in the 1960s.

“Change doesn’t occur if everybody’s comfortable, right?” Filner asked. “So, you have to create some tension, but you’ve got to do it creatively, otherwise people just get mad at you and don’t listen.”

Communications senior Hallie Jacobs wanted to know what the mayor would do to boost job availability for college graduates.

“So, I want to do a couple things,” Filner responded. “One, I have to do everything we can to raise the general economy up,” which includes plans to increase employment by expanding the city’s ports and upgrading the city’s buildings to solar power, a move which the mayor said would bring hundreds of jobs.

Secondly, Filner said the city would work to provide internships, not only in politics, but also in engineering, transportation, environmental and other municipal services. “People can intern in those things and get…the practical experience that would help them get a job.”

The mayor also emphasized how young people can take part in civic affairs and bring about change in their communities. He pointed to his experience in the civil rights movement as the foundation for this belief.

“We changed American history,” Filner said. “I have all confidence that change is possible if you get involved, and there are so many levels and so many interests…It’s infinite.”