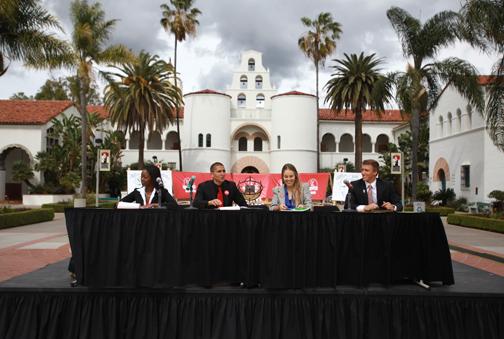 The candidates for president of Associated Students gathered yesterday for their debate portion of the A.S. elections. Theirs was the last debate before voting begins on Monday, March 11.

The four candidates seeking to lead the student body focused their strategies on having better communication with student organizations and smoothly transitioning into the new A.S. government structure.

Presidential candidate, women studies and international security and conflict resolution senior Jessika Seekatz suggested the implementation of an open forum at the end of every semester in order to maintain communication between the student body and its government.

“They try to tell us that there is communication and even though I understand the obstacles, I still don’t think there is enough representation,” Seekatz said.

All four candidates agreed that ensuring effective communication would be their number one priority if elected. Along with communication, the representation of student organizations on campus was of big concern among the candidates, especially with the restructuring of A.S.

Criminal justice junior and presidential candidate Sean Guardian, who was a voting member on the restructuring board, said it took several years to put together the new structure, and that it was created to benefit all students.

Presidential candidate and finance junior Josh Morse said he sat in on most of the restructuring meetings and is certain that it will be a fluent transition; however, he said good leadership is imperative in order for A.S. to transition as expected.

International film student at San Diego State and human rights activist Nadir Bouhmouch sent a question via Twitter for the presidential candidates: “A.S. has been quite silent about budget cuts, what would you do to make the student voice more heard in Sacramento?”

In response, political science junior and presidential candidate Canae Washington responded proudly saying that during her time serving as vice chair of external affairs in A.S., she and her colleagues helped proposition 30—which increased taxes on high-earning Californians to fund higher education—pass by sending letters to executives in Sacramento.

Another issue concerning the SDSU community is the possible smoking ban throughout campus. The candidates had different views on how this potential ban should be handled. Washington said there should be designated smoking areas at a place with moderated traffic—opposing a complete smoking ban on campus.

Seekatz stressed the importance of student feedback on the smoking ban and said that students should be the ones deciding whether there should designated areas for smoking on campus or none at all.

“As a student representative, it is not what I want, but what the student body wants,” Guardian said. “If students want a smoke free campus, they can have it. If not, they shouldn’t have it.”

Morse said the SDSU community should take into consideration the fact that the California State University system wants smoking completely banned, but agreed that student feedback would be crucial to this decision.

Voting will begin on Monday, March 11 via WebPortal and will close on Thursday, March 14.