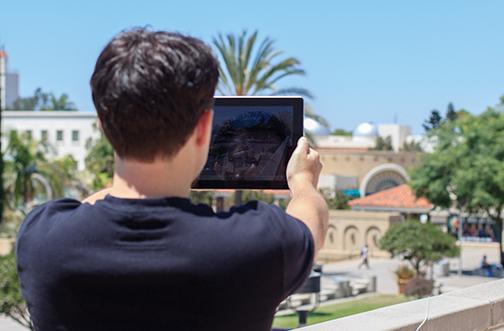 Aaron Mento is the writer and director of “Standards of Living,” the first ever full-length feature filmed on an iPad. The former San Diego State student and The Aztec writer has created a complex horror-science fiction comedy about an unfunny stand-up comedian who travels to another dimension to save a mysterious man’s daughter. If this sounds offbeat, the plot actually makes sense in the context of the flick, and the result is an original piece of storytelling.

The Aztec: Tell me a little bit about your experiences at SDSU and what you majored in.

Aaron Mento: I majored in television, film and new media and did some short films at State. They were all horror related. That’s always been my thing. My thesis film was a horror movie that I shot at my parents house in Poway. I continued my tradition on into Loyola Marymount University. I did a horror film and shorts there too.

TA: What did you do between graduating and filmmaking?

AM: I graduated from San Diego State and went right to LMU for my master’s degree. Afterward, I had written a few horror feature length screenplays and they were too big budget for me to pull off in my own.

I got a 9-to-5 job to pay the bills doing search engine optimization work. One day on the job, my left eye went blind for 15 minutes after looking at excel spreadsheets. It finally went back to normal, but the experience scared me.

I went to the doctor and he said I had an ocular migraine, which is what I call my production company. That kind of kicked me in the pants and made me realize that I needed to make a movie. I can’t just wait for someone to invest in my scripts. I just needed to make something that I could pull off on my own.

The inspiration for “Standards of Living” is that I was looking at my iPad one day, and I just thought, “Why couldn’t I just make a movie on this instead of on a high-end camera?” It seemed like a wild challenge.

TA: Who influenced you as a filmmaker and writer?

AM: Definitely “The Twilight Zone.” They can do so much with just one set and low-tech special effects. Limitations can give you the best creative vision. We literally only had two locations to do the whole feature and it really made me use my imagination.

Don Coscarelli inspired me. He is responsible for the “Phantasm” series and the first one is very home made. Coscarelli did a lot with no budget and it became pretty huge.

David Lynch is another big influence on me. “Twin Peaks” blew me away. So did “Inland Empire.” He shot all of that film on standard-definition digital video. It’s rough looking, but it fits the story he was telling and probably wouldn’t have worked on film. That definitely set lights off on my head.

That’s also a plus of filming in such an intimate setting. It feels real because you see the characters conversing with each other in a small space and you really get a magnifying glass on these people’s emotions.

TA: What are your plans for some of your future projects?
AM: I wrote a feature-length screenplay called “Survival High,” which is a horror movie obviously. It is based on a short from LMU and “Survival High” was actually a top 10 finalist at Cinequest Film Festival in the screenplay competition.

The plot sets a horror story at a campus after hours. There is an evil teacher and I play with some of the mechanics of teacher versus student.

It is controversial, especially with the way gun control is going and school shootings. The movie addresses some of that and the time is now to reflect upon this in a horror movie. It is similar to when “The Texas Chainsaw Massacre” came out and how that was an allegory about the Vietnam War.

What’s great about the horror genre is you can address current events without shoving them down peoples’ throats, which can happen in drama. Themes can be deeper and hidden and the final product can have more of a punch.

TA: Do you have any advice for SDSU students?

AM: If you see boundaries, go through them. Don’t have anyone tell you that a certain kind of movie can’t be made. If you feel like you can tell your tale with your phone, then do that.

Above all else, tell a great story. Don’t let money and equipment get in your way.

“Standards of Living” can be watched for free at standardsoflivingmovie.com.