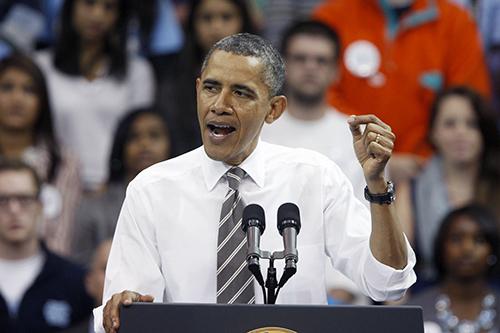 President Barack Obama set forth his latest plan for higher education reform Thursday in a speech in Buffalo, N.Y., the first stop of his two-day bus tour through New York and Pennsylvania.

The president proposed a federal aid plan to help universities make college more affordable for students. This will be determined by how well each university provides a valuable education—one that allows students to graduate in a timely manner and promises a return on investment—and help students manage debt. Obama plans to do this by directing Secretary of Education Arne Duncan to devise a rating system to evaluate colleges based on the president’s outline to be put in place by 2015.

The president plans to work with Congress in passing legislation that would use the ranking system to determine the amount of federal aid colleges can receive.

The amount of a student’s federal Pell Grant or interest rate on a loan could depend on the rating of the student’s university with Obama’s new plan. Students would also be held accountable by being required to complete a certain percentage of their courses in order to continue receiving financial aid.

At San Diego State 20,348 students, 62 percent of the student body, received some form of financial assistance in the last academic year, including grants, scholarships, loans, fee waivers and other resources.

“Taxpayers shouldn’t be subsidizing students to go to schools where the kids aren’t graduating,” Obama said.

Rising tuition costs and student debt have become a national issue. During the past decade, tuition in public four-year universities has increased at an average of 5.2 percent annually and costs on average $8,655, according to College Board.

In the California State University system, average tuition for undergraduates during the 2012-2013 academic year was $5,472, more than twice what it was in 2004, according the CSU website.

Obama’s goal is for Congress to pass legislation that would tie federal financial aid to college performance with the upcoming reauthorization of the Higher Education Act.

As states and the federal government continue to experience budget crunches, they could come to embrace performance measures as a determining factor in the allocation of resources.

“Whether we like it or not, I think accountability is inevitable,” SDSU Financial Aid and Scholarships Associate Director Chris Collins said.

Aside from laying out the plan for a college rating system, the president challenged colleges to innovate approaches to learning, including accelerated degree programs and online courses.

Additionally, the president called for Congress to expand the federal “Pay As You Earn” plan, which allows certain borrowers to make monthly payments equivalent to 10 percent of his or her discretionary income for student-loan debt. Income-driven repayment plans have helped 2.5 million of 37 million student loan borrowers, according to the president’s administration.

The CSU has approved of the president’s calls for accountability in higher education and emphasis on performance measures, as well as his interest in rewarding institutions that enroll and graduate greater numbers of disadvantaged students.