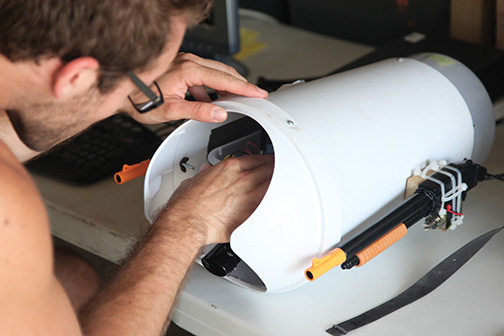 Currently underway is the creation of a robotic submarine or “RoboSub” by one of San Diego State’s engineering organizations, the Mechatronics club. The goal: To compete in the 17th Annual Association for Unmanned Vehicle System International RoboSub competition. The team plans to build a RoboSub prototype during the fall semester and then develop an underwater practice course in the spring.

After attending this year’s competition as spectators, the team has worked all summer on a “water-fearing” prototype formally called the Hydrophobe Project. The team hopes to develop a model that will oust its competition in image processing, maneuvering exercises, path following, in addition to torpedo launching and targeting.

Competition consists of schools across the country and globe. Because of this the club plans to spend spring semester testing its RoboSub in a course made in a pool.

“I think we’ll do decent against our competition, the more time you spend practicing in the water the better your sub will do,”  electrical engineering senior Nick Thorpe said.

The RoboSub will use image processing technology and algorithms to locate different targets and process colors. There is no remote control, just the sub itself maneuvering through the course. The Mechatronics Club plans on installing a time limit to its sub in order to complete the most obstacles during the 15-minute competition.

Weeks ago the club received funds from a local laser manufacturing company called Cymer that will help in the development of this project. This represents a quarter of the organizations’ overall fundraising goal of $80,000. The Mechatronics Club hopes to continue raising money through pledges with other local companies.

Universities such as Cornell University and others overseas invest more than $100,000 on their RoboSub.

The competition itself involves schools cooperating with each other. Helping a school with its programming or coding is common in the midst of the competition.

“It’s all of us against the course,” Pritts said.

A showcase of the club’s RoboSub prototype along with other image processing projects, robots and programs will take place Sept. 6 from 3:30-6 p.m. at Scripps Cottage. The goal of the showcase is to introduce students to what the Mechatronics Club offers, to increase membership and build awareness and support about the RoboSub competition.

The Mechatronics Club is one of the few clubs on campus that is student-driven and hands-on.

The RoboSub is one of many projects that goes beyond the rigorous course work correlated with engineering. As put by Thorpe, “There’s light at the end of the tunnel.”