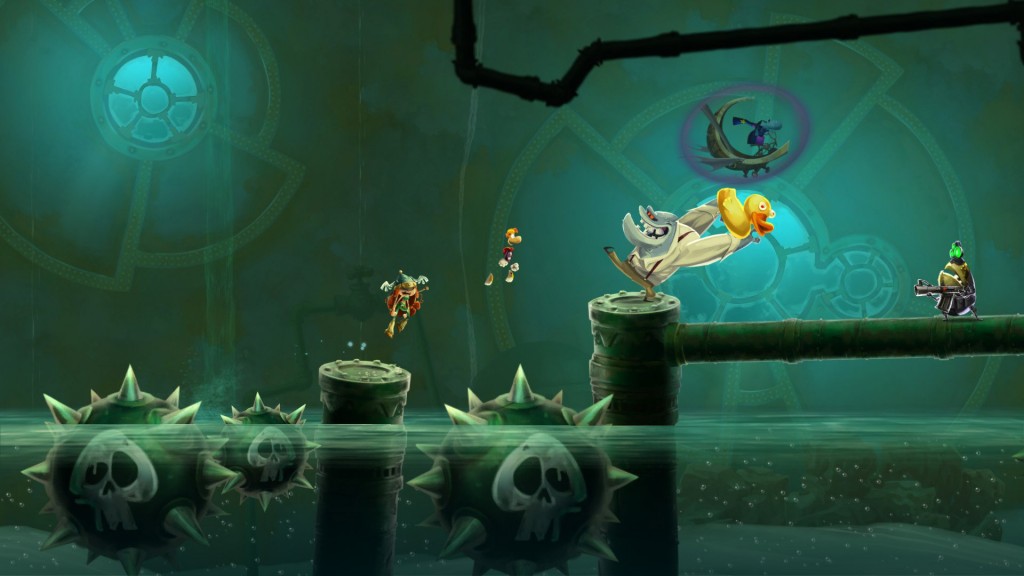 Rayman and his friends are back in this sequel to “Rayman Origins.” Originally slated to be a Wii U exclusive, “Rayman Legends” was delayed for a few months so that a port for PC, PlayStation 3, PlayStation Vita and Xbox 360 could be made for a simultaneous launch. But enough about that, let’s get right into it.

“Rayman Legends” is a 2D side-scrolling platformer with precision platformer and puzzle platforming elements thrown into the mix.

Rayman and his gang are tasked by the great and powerful Bubble Dreamer to cast out evil from The Glade of Dreams. Now, mind you, the Bubble Dreamer is literally a gigantic frog with facial hair of epic proportions that produces bubbles from what appears to be a hookah pipe, so I’m not sure how serious things actually are, but that’s the story players are given.

As Rayman, or one of the other 30 unlockable characters, you must enter six differently themed zones, each of which has a handful of levels, and rescue the Teensies. These little guys are apparently the inhabitants of The Glade of Dreams, and they’ve all been captured by the malevolent forces that have invaded the Glade. In each normal level, there are 10 Teensies to find. Eight regular Teensies, one king Teensie and one queen Teensie (apparently Teensies have a lot of kings and queens).

In addition to the normal levels, there are chase, boss fight and music levels. Chase levels have you running after evil Teensies who torment other Teensies for funsies apparently. Boss levels have you, of course, facing off against a boss character who is most likely 10 times the size of Rayman and his friends. But once players defeat the boss, they are treated to a music level. Now, the music levels might well be the best part of this game. These levels rely on the player to be as precise as possible and to never let their momentum stop until the level is complete. Each music level is scripted right down to the last note. You jump, fight, swing and run to the music. It’s really an awesome experience when players clear a music level without missing a single beat. It’s even more fun when playing with friends.

“Rayman Legends” is a one to four-player game that supports local (friends sitting on a couch together playing on the same console), online (playing with friends or random strangers from everyone’s respective homes) and five-player multiplayer for the Nintendo Wii U console exclusively. Meaning the best version of this game is on the Wii U. But don’t fret, the second-best system to play this game on is the PS Vita, which supports two-player online multiplayer.

In the Wii U version the fifth player, whose screen is on the Wii U gamepad, follows Rayman’s little, green, fairy-frog friend named Murfy. In certain levels, hero(es) will call upon Murfy to aid them on their quest to vanquish evil. While playing as Murfy, the player has to manipulate the environment around the other players and help them get through various obstacles while solving puzzles.  On PC, PS 3 and Xbox 360 users can only play with up to four players, but that doesn’t mean Murfy doesn’t help you out. In fact, once players get to Murfy levels, one of the four players gets control of Murfy, in a somewhat awkward fashion. While controlling your normal character, you’re given prompts to do Murfy commands to manipulate the environment. This is an awesome mechanic and all, but it’s prone to be confusing and sometimes even downright cumbersome. It’s easier for that player to kill off his or her normal character and focus on playing as Murfy the whole time.

“Legends” is a game with few flaws; the polish that has gone into making this game is apparent and makes the game fantastic. Fans of “Rayman Origins” are also treated to a bit of nostalgia as five zones of “Origins” are fully playable in “Legends.” That, and the fact that the adventure is filled with challenge modes and an addictive multiplayer “soccer” mode, makes “Legends” a game that’s fun for all ages.

Although the best version of the game is on the Wii U, I recommend adding “Legends” to your PS Vita library, because it’s a great game to pick up and play while waiting between classes or during car rides.