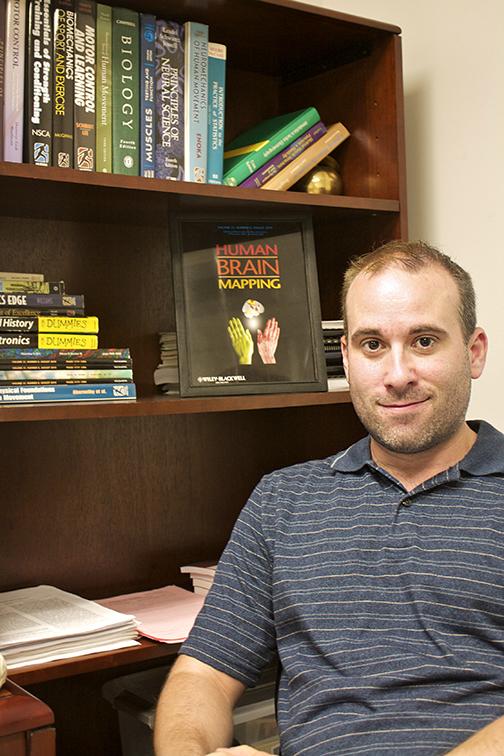 Approximately 1.7 million traumatic brain injuries—about 75 percent of which are concussions or milder forms of TBI—occur yearly in the U.S., according to the Center for Disease Control and Prevention.

Balance testing is commonly used to recognize concussions. However, popular concussion tests currently implemented rely on a trainer’s ability to count visible errors and deviations in movement such as hand and foot movement, Goble said. Force plates are also used as a form of measurement, but can cost up to $15,000 per plate.

The technology Goble and his team have developed has the ability to objectively quantify the balance test. Using the B-TrackS, the patient stands on a board that measures swaying, which is an indicator of balance.

Goble partnered with SDSU’s College of Engineering and the Zahn Innovation Center to create the technology. Goble hopes to make the device affordable enough for practical implementation in high schools and universities, in addition the researchers have reduced costs with a number of innovative application, the cost making it about $1,000.

Goble said he hopes the device will have other practical applications, since balance can help diagnose disease and brain injuries.

“We think it could have an impact with lots of things that involve the brain, like multiple sclerosis or Parkinson’s disease,” Goble said.

Goble’s goal is to recruit 100 athletes during the fall semester to test the technology. He also said the new methods will also be used by physical therapy clinics to track recoveries.

Goble will begin trying out the technology with the SDSU rugby team. Rugby is a high-impact contact sport, and has the second highest concussion rate.

Goble is working with the rugby team’s official strength and conditioning coach Orin Catrett, who will assist in baseline testing to access participating athletes before the season, and test any athlete’s potential head injuries as they are diagnosed.  Catrett is also in the kinesiology master’s degree program with an emphasis in rehabilitation science.

“As a grad student heavily involved with research, I think this is a great opportunity to explore concussion testing being that it is a ‘hot topic’ throughout professional sports and sports in general,” Catrett said. “Since I also currently play rugby and coach, this makes it very exciting to see what new endeavors we are able to peel back from the surface.”

Catrett said the technological breakthroughs could provide a testing method to prevent injured athletes from returning from the field too soon.

Goble hopes to have the device commercialized and on the market sometime next year.