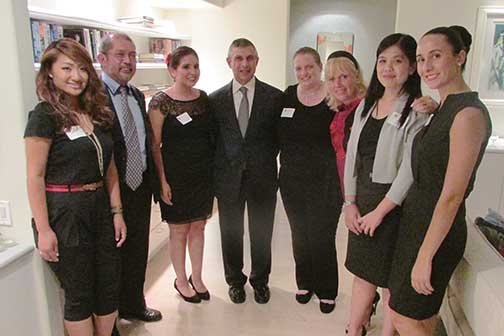 “We have five stars which represent our values, very much like U.S. values: democracy, peace, progress, justice and equality,” Mirpuri said while holding up the Singaporean flag.

The ambassador’s discussion briefly summarized the history of Singapore and explained how the country’s relations with the rest of the world have impacted its economic success.

“We have opened up our economy from our openness to foreign investors and our relationship with people around the world,” he said.

Within his speech, the ambassador also mentioned trade relations, the country’s lack of natural resources, the development of infrastructure, its emphasis on education and many other topics.

[quote]We have opened up our economy from our openness to foreign investors and our relationship with people around the world.[/quote]

The ambassador foresees a promising future regarding trade agreements. He spoke of the Trans-Pacific Partnership within 12 different countries, including the U.S., which he hopes to have arranged by the end of the year. Mirpuri believes this partnership will help the U.S. reach out to different countries interested in American companies and enhance research opportunities. As for Singapore, it would become a “national regional hub.”

The event atmosphere was ideal for international business senior Michael Cash, he said.

“I want to find out different perspectives and what the ambassador of Singapore has to say,” Cash said.

“Our mission is to connect diplomacy with the private sector, financial sector, government and education,” von Ber said. “We want to bring the highest level diplomats in intimate atmospheres to have a collegial exchange of ideas.”

International business senior and Ambassadorial Roundtable intern Kassandra Gist said she had a positive experience working for the organization.

“I have had my eyes open to how many different international services there are in San Diego,” she said. “To be an international business major and be thrown in a room with businessmen from San Diego and international ambassadors is a really big opportunity.”