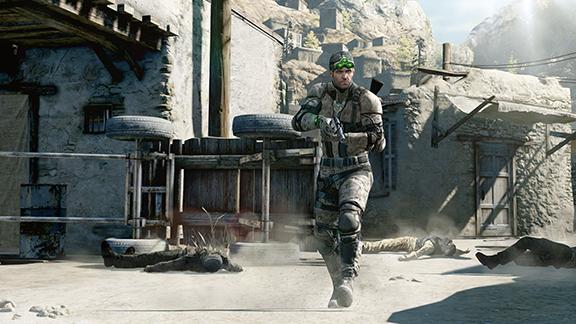 Tom Clancy’s “Splinter Cell: Blacklist” represents an interesting note in the history of the “Splinter Cell” series. After the revamping of Sam Fisher, the main protagonist in “Splinter Cell: Conviction,” Sam was left with an old dog look and sound. His voice was provided by famous actor Michael Ironside, but is now replaced by Eric Johnson. His voice became synonymous with the man of Third and now Fourth Echelon.

“Blacklist” encounters a unique problem right out of the gate. Ubisoft, SA., in an attempt to capture the actor’s face in order to provide a real emotional look to Fisher, went instead with Johnson’s voice. The reasoning behind it is logical: Ironside can’t go running around in a capture suit at his age, so a younger body was required. However, sometimes it sounds jarring when Sam calls to his young daughter, and she sounds just as old as he is.

But let’s get down to business. “Blacklist,” developed by Ubisoft Toronto, is a difficult game. I consider myself a good player of high quality third-person shooters. I was dying at every level a minimum of ten times. That being said, the difficulty level is what makes it a good game. “Blacklist” does an excellent job of making you want to try harder at beating it.

The three skill trees—Ghost, Panther and Assault—appeal to all play styles. If you prefer to go through missions silently, rarely interacting with guards and using non-lethal force, then Ghost style is for you. If you prefer to use the deadly Karambit knife for something other than picking your teeth, Panther style combines stealth and deadly force. However, if you just like watching things go boom and guards burning to death, Assault may be your best bet.

The Mark and Execute system from “Conviction” returns, only now there are more ways to gain the Execute ability besides hand-to-hand kills, making the game even more streamlined.

All of these skills are complemented by an upgrade system that allows you to choose what kind of gadgets, guns, suits and, most importantly, what color your goggles are. “Blacklist” also allows a series of side missions in addition to the campaign missions that can be completed in order to earn more money by pulling off different types of kills and achieving other goals. These missions usually require talking to your fellow crewmates.

Multiplayer returns, and the famed Spies vs. Mercs match also makes a comeback. Here, mercenaries attempt to stop spies from downloading information from terminals. The differences between the two are obvious—mercenaries have access to much more firepower and tools, but are hindered by their first-person perspective and inability to access higher platforms. Spies, on the other hand, have no problem getting around these higher areas, have third-person, view and employ stealth tactics to better achieve their goal. All of these elements come together in a fast and frenetic play style not normally seen in other shooting multiplayers that blend beautifully in “Blacklist.”

Now for the juicy part: the story. I won’t spoil anything major, but to start you’re given an entirely new team with the exception of one stalwart of the “Splinter Cell” series. Anna Grimsdottir returns as the lead technical operator when Sam’s away on missions. Former CIA operative, Issac Briggs can also be played when going on co-op missions in the game. Charlie Cole, the tech guy, was probably my favorite, mostly because he represents a younger demographic in computer and gaming culture. He also dresses like a hipster, which is awesome.

Eventually, the United States finds itself under attack by a mysterious group known as the Engineers. The Blacklist is a list of targets on U.S. interests with foreboding names like American Blood and American Fuel—locations and targets meant to strike terror. To prevent future attacks, the Engineers demand the U.S. withdraw all of its soldiers from nations currently under U.S. occupation.

Much of this definitely rings solid in the political environment we currently live in. Throughout the tale, Sam, and to a greater extent, the player, must use discretion to make hard decisions such as whether or not to kill or spare characters and what it means to use the Fifth Freedom, or the license to kill, as described in the trailers.

“Blacklist” may not have the same voice actor or even the same look as past “Splinter Cell” games. Instead, it seeks to redefine stealth action games in its pursuit of perfection, tips its hat to the older installments in the series while moving forward into the future of video games. Just don’t get me started on the Perfectionist difficulty.

ALSO READ: Future for Electronic Arts looks grim with a glimmer of hope