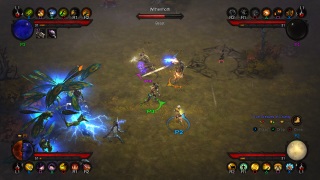 “Diablo III” has finally been released to the delight of console gamers, while PC gamers worldwide let out a collective sigh of discontent. So before getting into the meat and potatoes of the console version of “Diablo III,” it would be best to take a look at the original version that came out on May 15, 2012 for the PC and Mac.

After 12 years since “Diablo II,” Blizzard Entertainment released the third and most controversial installment to the beloved dungeon crawler franchise. The advent of “Diablo III” would, in theory, satisfy the need of fresh content to longtime players and introduce new players to the fantastic loot-filled world of Sanctuary. That was the plan, at least.

What we got instead was essentially an extended beta test. Gone was the addictive loot system that kept fans playing for years. Gone was the belief that we would be getting a newer and better version of “Diablo II,” which is arguably the best game in the series. In its place we got a disappointment. The first playthrough of the game was so easy, if you were a veteran you nearly had to try to die intentionally. But that was fine, right? The first play-through is there so you can enjoy an engaging story filled with righteous angels and angry demons, and first-timers would be able to learn why people loved “Diablo” so much.

Unfortunately, the story is a hot mess. Almost every single plot twist is telegraphed far in advance, save for one moment that broke my Horadric heart and made me forever hate the story. Not just normal hate-forever hate. Every time you’re introduced to a new character, it was almost guaranteed they were going to betray you, and you were forced to hammer them to death. What’s more, the difficulty of the game went from easy to delightfully challenging to rip-your-hair-out impossible in no time.

It was so hard, the only way to survive assaults from the weakest creatures in the tougher difficulty levels was to spend time in the auction house. Think eBay, but for in-game items.

So here we are, one year and a few months later and “Diablo III” is now out for PlayStation 3, Xbox 360 and is set to be released on the PlayStation 4 next year. At this point you should be asking yourself, “why would I ever play this game on a console?” That’s a fair question, and here’s a fair answer; “Diablo 3” for consoles is the best version of “Diablo III” ever.

Blizzard traded mouse clicks for game sticks–and buttons, and directional pads, and, you get the idea. Instead of a mouse and keyboard you play “Diablo III” with a standard PS3 or Xbox 360 control. Each character’s skills are mapped to individual buttons on the game pads, and you can freely assign any ability to any button, should the ability require a button press to activate. With this setup, “Diablo 3” goes from a click-fest to a beat ’em up dungeon crawler in the vein of something similar to “Gauntlet” or “Golden Axe”.

In addition, Blizzard streamlined the user interface of your character’s inventory and skill menu by adopting a radial dial system. Just point the thumb-stick in the direction of the area you wish to equip something to and hit the “confirm” button.

This new version of “Diablo III,” for all intents and purposes, is fixed. The auction houses are a thing of the past. To compensate for their removal, the amount of loot and gold that’s dropped was reworked to be more fair. All of the patches that were applied to the PC and Mac versions have all been built into the console versions, effectively making the game more fun and worth a playthrough or twelve. A local co-op feature was also added to the game so you and up to three friends can all play “Diablo III” on the same system at once.

“Diablo III” on PC and Mac had many flaws, but it had its moments. However, the console version is fantastic. It’s everything that the original version should’ve been. There are fixed drop rates, no auction houses, and best of all, it has an offline mode. But of course, the story is still the same. Hopefully, the issues with the plot will be fixed in an expansion pack.

If you haven’t played “Diablo III” yet because you heard it was flawed or because you’re not a PC or Mac gamer, now is the time. Defeat the hordes of Hell today; maybe invite your friends, too.

Information about “Diablo III” can be found at us.blizzard.com.