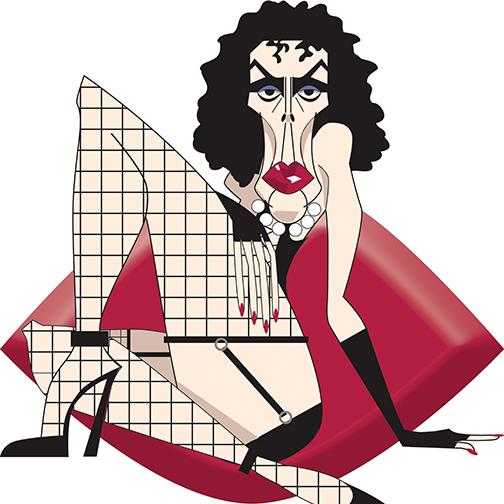 Landmark’s well-respected Ken Cinema continues its Saturday midnight movie series with the musical horror comedy, “The Rocky Horror Picture Show.” This is a must-attend event for any cult film fans looking to say they’ve “been there, done that,” or for those helping friends who haven’t seen the flick yet by giving them an experience they’ll never forget. According to Landmark Theatres, the film is “the longest-running midnight movie of all time,” and will entertain even the most prudish of spectators. This R-rated (but preferably 18 and older) event encourages costumes to be worn similar to any character in the film. Most importantly, costume or no costume, obnoxious participation is a must.

To help the audience get all rattled up, the first half hour of the night is spent with a master of ceremonies who boos common movie theater rules and humiliates “The Rocky Horror Picture Show” virgins. After that, entertaining embarrassment is complete. The “Crazed Imaginations” cast performs onstage while the film projects onscreen. Other members actively run up and down the aisles shouting profanities for the audience’s amusement. The atmosphere is a bit of burlesque-meets-Comic-Con with a lot of holding on to the impatience of wanting to do the “Time Warp” again and again. All-in-all, it’s the Halloween party that never ends.

If this cult favorite experience isn’t in your system yet, it’s not too late to familiarize your senses with the same shock and awe that actress Susan Sarandon endured back when she was young. Not to mention, if you haven’t had the opportunity to see Tim Curry at his unconventionally sexiest, then this is your chance.

Though the original stage version was performed almost 40 years ago, hard-core fanatics agree there will never be a sweeter transvestite than Dr. Frank-N-Furter anywhere on screen—ever.

All shows play on select Saturday nights at midnight. The next events will be held on Oct. 26 (costume contest night), Nov. 16, and Dec. 21.

Also Read: ‘Priscilla’ proves to be a deeper story than you might expect