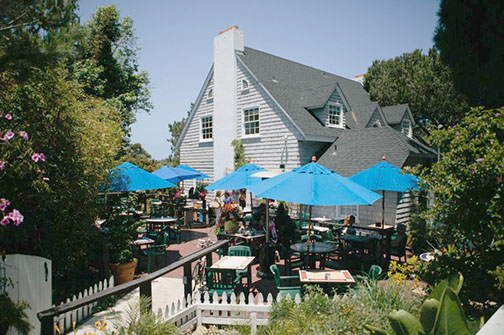 The Stratford Court Cafe solves the problem of craving delicious sandwiches or a hot cup of coffee, but not being able to go anywhere because you’re spending time with your furry companion.

The Stratford Court Cafe is a dog-friendly, outdoor eatery in the heart of Old Del Mar, located in a 1900s Cape Cod-style home with a garden patio. A cafe was added to the home about 25 years ago, and current owners Greg and Terry Sonken have been running the family business there for six years. In the past, Greg Sonken and the kids would take a trip there for smoothies, so they were already familiar with the place.

Terry Sonken had always wanted to start a business of her own after the kids were grown, so when the cafe went on sale seven years ago, she knew it was meant to be.

“It was that special place that doesn’t come out on the market very often,” Terry Sonken said. “It has a homey feel.”

The menu is fairly simple and decently priced considering the portion size. It mainly consists of breakfast and sandwiches, and the prices range from $9 to $12. The cafe’s lunch sandwiches range from the classic avocado BLT, to the popular Vermonster to the Thai chicken wrap. Some of the most popular breakfast items include eggs Benedict, waffles, breakfast burritos and the acai bowl. The best part is breakfast is served all day.

Being a cafe, it naturally offers a selection of beverages. It sells smoothies, all made from fresh fruit, as well as coffee.

“We have really great coffee drinks,” Terry Sonken said. “People love our coffee because you get free refills.”

The food is prepared exquisitely and is presented well. The portions are worth what you pay and you don’t have to worry about the quality. Much of the food is on the healthy side, made from scratch with organic ingredients.

“Everything is made fresh to order, nothing frozen. Nothing is boxed or pre-packaged,” Sonken said.

The environment around the Stratford Court Cafe is a welcoming one. Between the beach, the park, and the Powerhouse Community Center, the cafe is situated in the perfect location for both locals and tourists.

“There’s such a sense of community there,” Terry Sonken said.

And there’s no better way to open up to a community than by letting its members bring their dogs. The cafe had been a dog-friendly one even before the Sonkens bought the place.

“The customers come to expect that of the place, so I certainly didn’t want to change that,” Terry Sonken said.

The restaurant is always filled with four-legged friends and their owners. The cafe even makes and sells its own dog biscuits. The cafe’s mascot is represented by the Sonkens’ daughter’s English bulldog, Stella. Stella was even featured on an episode of “Dog Whisperer with Cesar Millan.”

“Business is doing great, even through the tough economy. The locals help support good places and they are a huge part of the Stratford,” Terry Sonken said.