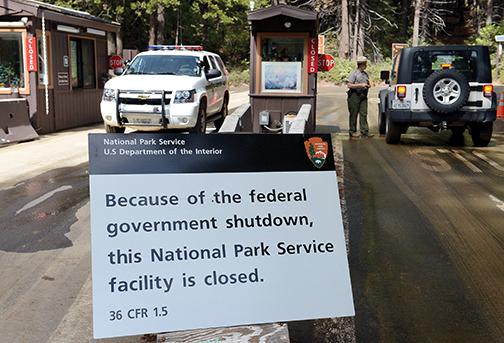 Americans may be barred from the National Parks and Washington Monument, but administrators and faculty said it will be a least a month before reverberations from the government shutdown reach San Diego State.

Around 800,000 federal employees were furloughed as a result of Congress’s failure to pass a budget resolution to take effect Oct. 1, according to media reports. Congressional inaction on the budget is a result of a stalemate between Republicans and Democrats in Congress over implementation of the 2010 Patient Protection and Affordable Care Act, known as Obamacare, which went into effect the same day.

Approximately 52 percent of funding for research at SDSU comes from federal grants. Last year that amounted to $59,642,201. Vice President for Research and Dean of Graduate Affairs Stephen Welter said current grants to the university’s research programs will not be suspended, although applications for new awards will not be processed during the shutdown and some agencies are discouraging applications.

The SDSU Research Foundation informed project directors in a Oct. 2 memo that the payment mechanism of the National Science Foundation, which granted more than $8 million to SDSU last year, is not currently operational.

Welter said that in the event that a prolonged shutdown occurs, the SDSU Research Foundation will be able to credit ongoing projects from its own reserve fund.

Heads of the SDSU Office of Financial Aid and Scholarships, Joan and Art Barron Veterans Center and the Children’s Center said services through October will only be mildly impacted, though that could change if Congress does not reach an agreement on appropriations.

“As far as educational benefits for our student veterans, very little impact,” said Todd Kennedy, a history senior and Veterans Coordinator in the veterans center. “As of right now it’s just looking like things may be delayed by a few days only because there’s fewer people working than would normally be processing their stuff.”

In addition, the VetSuccess on Campus program led by Natacia Cordle, a campus representative of the Department of Veterans Affairs and veterans counselor, is slated to be cut once currently available funds run out, Kennedy said. Vocational rehabilitation and educational counseling, also led by Cordle, could be limited.

Associate Director of the Office of Financial Aid and Scholarships Chris Collins said there will be little impact on student loan processing and disbursement in the near term.

The Children’s Center, which participates in the Child and Adult Care Food Program, a federal program that pays for children’s meals, will receive reimbursement for the meals it serves this month, said Children’s Center Director Robin Judd.

The last time the government closed in response to an impasse in budget negotiations was for three weeks in December 1995 into January 1996.

“Here in preschool we teach children how to work together to solve problems and compromise,” she said. “I would hope that our government would do the same thing.”