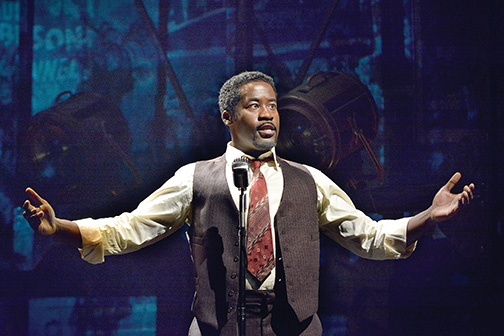 Lights, camera action-The production of “The Tallest Tree in the Forest” directed by Moises Kaufman is coming to the La Jolla Playhouse. Oct. 10 through Nov. 3, theatergoers can watch Daniel Beaty’s multi-character performance as the lead, Paul Robeson.

Beaty acquired a bachelor’s degree with honors in English and music from Yale University and an MFA in acting from the American Conservatory Theater. Since then, he has had a tremendous career most theater performers would be envious of. He has accomplished the title of an award-winning actor, singer, writer and composer. His career has allowed him to travel the world, taking him throughout the U.S., Europe and Africa. Beaty has been given a series of awards for his writing and acting including the Culture Award for Best in Theater given to him by New York Magazine in 2007. Beaty has starred in many theatrical productions including “Emergence-See,” the sold-out show which was so popular it ran a extended production at The Public Theater.

Beaty’s latest work “The Tallest Tree” in the Forest,” is a play with music about a man named Paul, who is known for being an iconic African-American artist in the early 20th   century. Coming from a low-class life, Paul was the son of a slave who had to work hard to make a name for himself. Because of Paul’s enormous talent, he becomes immensely famous and wealthy, however, his activism and critical views of the U.S government cause him to be blacklisted during the McCarthy time period. Some of the signature songs in the show include “Ol’ Man River” and “Steal Away.” The show exhibits the daring choices that Paul faced that ultimately led him to live a remarkable life.

Kaufman has also won his fair share of prestigious awards, including the Obie Award for off-Broadway productions and several Broadway dramas including “33 Variations.” He is best known for writing “The Laramie Project,” which is being preformed by talented students at San Diego State in November at the Don Powell Theatre.

For more information about how to get tickets to “The Tallest Tree in the Forest” visit lajollaplayhouse.org/tallest-tree.