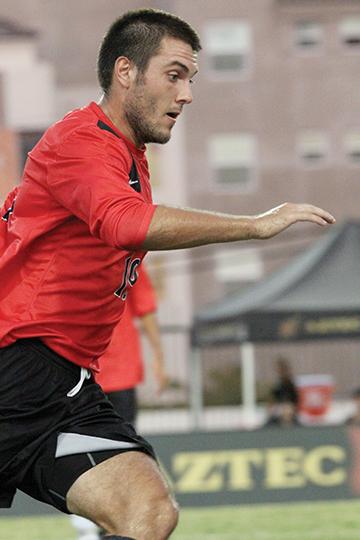 The San Diego State men’s soccer team took to the pitch at home on Thursday night hoping to conquer the No. 1/1/2 University of California, Berkeley. However, the Aztecs could not hold on to their 1-0 lead in the second period and the Golden Bears went on to defeat SDSU 2-1. Two days later SDSU tied Stanford University 3-3.

After going up 1-0 in the first half and giving up two unanswered goals in the second half against No. 10/9/11 UCLA a week and a half ago, the Aztecs hoped to score early and often against the Golden Bears last Thursday.

In almost repeat fashion, SDSU was defeated 2-1 by a higher ranked opponent after having the initial lead. The first 45 minutes of Thursday’s game was everything the home team could have hoped for; however, the remaining 45 minutes became their worst nightmare, yet again.

During the first half the Aztecs managed to keep the shot column even at 5 shots per team and had a couple of good scoring opportunities, including a shot by senior midfielder Kevin Bick that hit off of the post in the 19th minute.

The second half of the game also started off well for the Aztecs when senior forward Jordan Ongaro broke a scoreless tie with a header assisted by senior midfielder Abraham Villon.

Only nine minutes after SDSU had taken the lead, Berkeley tied it up with a wide-open shot by junior midfielder Max Oldham from the left side of the box after an attempted interception by senior goalie Blake Hylen. Soon after, the Golden Bears would put the game away in the 79th minute with a shot by freshman forward Christian Thierjung from straight on that sailed into the right side of the net.

Although the Aztecs had given up two late goals, they managed to get consecutive corner kick opportunities with little time remaining, though neither of these set pieces would reach the back of the net.

On Sunday, SDSU tied Stanford 3-3. The Cardinals scored the first two goals of the game in the first period, and the Aztecs answered back with two of their own in the second.

Stanford went on to score another goal late in the second, and less than a minute later SDSU’s Bick hit them right back with a goal to tie the game.

The Aztecs fought hard in overtime but couldn’t find the back of the net, and neither could the Cardinals as both teams attempted a shot.

Stanford came close to taking the win in double overtime, but a shot by sophomore midfielder Aaron Kovar went high over the net.

Next, the Aztecs head to Seattle to play the University of Washington at 1 p.m. this Friday, and then travel to Oregon to face off against the Oregon State University Beavers at 1 p.m. on Sunday.