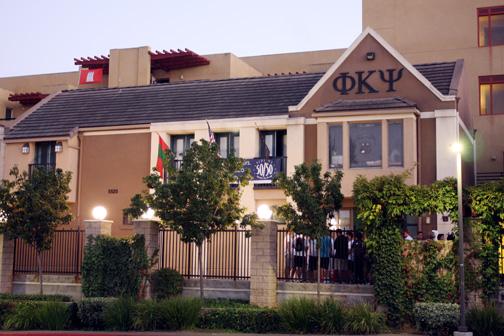 Two students associated with San Diego State’s Phi Kappa Psi were caught attempting to steal sheets from a local Best Western hotel for a toga party, channel 10 news reported on Wednesday.  The students were not arrested and charges were not pressed by the hotel. SDSU Student Life and Leadership is currently investigating the incident

In the interview with 10 News, the front desk attendant said the two students tried to get the sheets by saying they were collecting them for the homeless; however, the sheets were not given to them.  Fifteen minutes later the hotel housekeeping staff found the students in the laundry room and locked them inside until the police arrived.

“We are still collecting information so we don’t have a whole lot of details yet,” Hernandez said.

If the investigation finds that disciplinary action is needed for the fraternity, there will be a judicial meeting involving Hernandez, the Interfraternity Council at SDSU and the president of the fraternity.  If a meeting is required, the incident and possible consequences will be discussed.

“We like to be more educational with our sanctions rather than punitive,” Hernandez said.

Hernandez said there may be increased coverage since other fraternities have recently been receiving negative media attention.

“Not to say what they did was right,” she said. “But it seems like it has gotten very big.”

Hernandez said other fraternities in the country have been accused of much worse issues involving racial slurs and sexual assault putting a negative light on fraternities overall and making fraternities everywhere open to scrutiny in the news.

“It made me feel bad for the students, but on the same token that was a really poor choice,” Hernandez said.

Reactions among students on campus were similar.

“If they were stealing from the hotel they should be charged.” mechanical engineering sophomore Brennan Barry said.  “It doesn’t make me think any less of the frats though.”