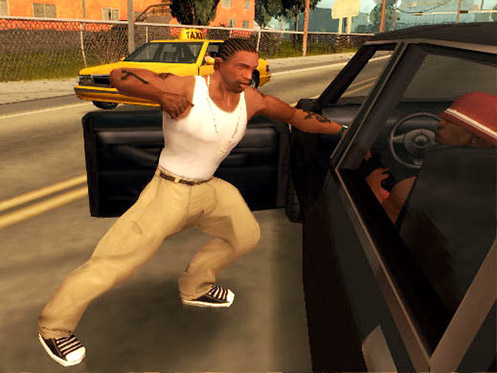 The violence of video games has consistently been at the forefront of the political battleground ever since “Mortal Kombat” first began showing blood. Since the days of “Doom” and “Unreal Tournament,” when it comes to violence, the media becomes transfixed on labeling the scum that has engaged in mass killings such as the Columbine High School, Virginia Tech and, most recently, the Newtown and Navy Yard shootings.

To clarify, games such as the “Call of Duty” and “Grand Theft Auto” series bearing a Mature rating are not meant to be played by children who are younger than 18. Despite this, kids will somehow find a way to buy these games, allowing themselves to be lulled into a fantasy of killing zombies and committing the best possible crime, setting the stage possibly for something similar to what I mentioned before. However, if the media insists on blaming video game violence as the cause of these tragedies, then it must also blame itself, TV, music and other forms of media for extending the ideology of “If it bleeds, it leads.”

With this in mind, games such as “Call of Duty: Black Ops 2” and “Grand Theft Auto 5” have been released to acclaim. However, there are many individuals concerned about the influence of such games on impressionable children. To begin with, “COD: Black Ops 2,” is often not shy about showcasing brutal interrogation scenes, gory decapitations and countless executions from the first-person perspective, create a sense of realism for the player.

In multiplayer and single player modes, gamers are given increasingly more complicated ways of killing opponents, sometimes by throwing axes, drone attacks and even small quad rotors capable of offensive tactics. The message is clear: Play the game long enough and you will be able to call down the wrathful finger of God to decimate and destroy your opponents.

“Grand Theft Auto 5” ups the ante in terms of violence, not just by providing the means, but also through a realistic mindset for committing these acts. Steal a car, go on a rampage, shoot up as many people as you can and if you die or get captured? A simple monetary deduction from your in-game bank account. No trial for everyone to judge you and sentence you to 20 back-to-back life sentences and no death sentence.

“Grand Theft Auto 5,” however, continues to challenge what it can present on the screen for the gamers to play. One particular scene involving one of the game’s protagonists, Trevor, who requires information from an unwilling non-playable character lets the player figure out how to extract it. I’ll let you use your imagination as to how he accomplishes said task, but regardless, is this crossing a boundary?

“Grand Theft Auto” is certainly not the first game to introduce the sadistic side of video games. Recalling the game “Manhunt,” also made by “Grand Theft Auto” series creators Rockstar Games, the character was required to execute other characters in scenes that were considered gruesome at best, heinous at worst. Developers know what’s popular and they know that controversy sells more than anything else.

Game developers are also constantly pushing the envelope of what can be accomplished in video games. “Grand Theft Auto 5” is a testament to that, with its very realistic settings, the myriad of activities that can be accomplished throughout the course of the game, from playing golf and tennis to investing in the stock market of all things.

But does it inherently violate an unwritten rule with its graphic depiction of violence and death? For gamers who are older than 18, I don’t think so. Those who have been raised well and reached that age of maturity, (while not fully matured yet) stand the best chance of being able to look at a video game with this level of violence and make the determination that that it is indeed a fantasy world, and that if the actions carry into the real world, the punishments and consequences for those acts are very real and costly, both to the victim and criminal.

Perhaps the video game industry has matured in its representations of real-world violence. If it has, and I am most certain it has since “Pac-man” doesn’t routinely strap 30 pounds of hardware and guns these days, then the regulation of these games needs to mature too.

Is it easier for the average video game store clerk to simply look the other way when an underage kid slaps down a copy of “Hitman: Absolution” or “Dead Island: Riptide” and the money to buy it? Of course it is, they have to worry about the bottom line. It’s up to parents and older gamers to act as intermediaries between the fictional world of the game and the world we live in, explaining the consequences and keeping things in perspective for them. Or you can just load up another game of Nuke Town 2025 and blow a zombies head off.