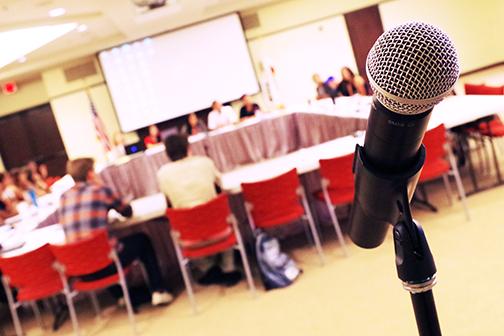 An ongoing plan by the Recreation and Wellness Commission of San Diego State to convert a lot behind Storm Hall into an athletic field received criticism during last week’s Associated Student Campus Life Council meeting for potentially exasperating parking issues with the adjacent Parking Structure 4.

“As a student who struggles to find parking in Parking Structure 4 every day, I’m worried about this plan,” head of the A.S. CLC GreenFest Committee and criminal justice senior Washington Navarrete, said.

Navarrete was joined in his criticism by many of the other A.S. CLC members, who voiced concerns about whether or not the space would be best used as an athletic field when it has potential to ease the saturation of students and faculty parking in Parking Structure 4.

The plan is meant to increase the ratio of field space to students at SDSU, which has a very low ratio compared to the national average, A.S. recreation and wellness commissioner and Business Management sophomore Tyler Aguilar said.

“One of the goals of this commission is to bring SDSU up to the standards of other schools around us, and without more field space we are falling behind,” Aguilar said.

Aguilar said that the lot is currently being used to store construction equipment and building materials for the work being done on Nasatir and Storm halls. Originally the lot was not available for use by students, but after completion of the construction there are no plans in place for its use.

Though ultimately the CLC does not have the legislative authority to designate the use of the lot, an inquiry from the CLC could potentially affect the administration’s plans for the lot. It would, however, require a great deal of resources to do so, Navarette said.

“This is more of an issue of whether or not we should be spending our vital resources on pushing for field space here when we could be doing something else,” Navarette said.

The council’s concerns may be reviewed during this Wednesday’s University Council meeting, and vote at the next A.S. CLC meeting to determine the support for future action by the Recreation and Wellness Commission, A.S. Executive Vice President and head of AS CLC Becca Cohen said.

Aguilar said that in the meantime, the Recreation and Wellness Commission will continue its inquiry into the issue.