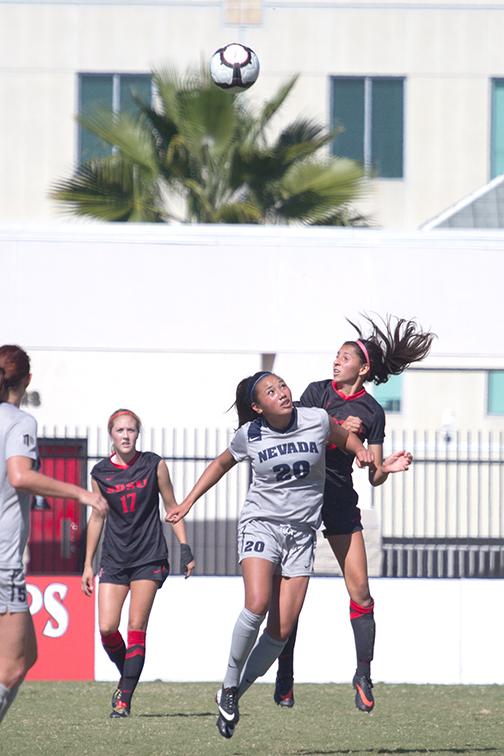 The Aztecs certainly didn’t disappoint the home fans on a Friday night as the scoring came early for SDSU against Reno.

Just past 1 minute into the contest, the Aztecs made their presence known when junior forward Hannah Keane scored from 15 yards out off a throw in. This marked Keane’s team-high 10th goal of the season.

The Aztecs didn’t need any more scoring after that, although they were able to add to their lead with goals from junior midfielder Kelsey Booth and senior defender Kory Spotts, each who scored their first goals of the season.

Two days later, on Sunday, Oct. 20, SDSU faced off against Nevada for its final home game of the season, also known as senior day. This year, six senior Aztecs will be graduating from the SDSU soccer program, all of who were acknowledged before the start of their final home game.

Although SDSU defeated the Rebels, the Wolf Pack didn’t make this one easy. Just 12 minutes into the game, the Las Vegas team made it known that they were here to play as they scored first off a 15-yard shot from junior midfielder Chrisalyn Fonte.

But just 2 minutes later, the Aztecs responded with a goal off a penalty kick from sophomore midfielder Victoria Barba to tie this game at 1-1.

The fight continued between the Aztecs and the Wolf Pack as both teams failed to score until the 89th minute. Booth put the Aztecs in the lead with a late goal when Nevada’s goal keeper came out in attempt to recover the ball, but Booth beat her to it and found the net. Booth’s goal came off an assist by senior defender Carli Johnson. With just 1 minute left, the Aztecs had a Senior Day victory.

[quote]“Some teams in tight games get flustered and start yelling at each other, pointing fingers,” Johnson said. “For us, we came tighter as a group and became one and fought until the end.”[/quote]

Head coach Mike Friesen felt relieved after his team squeezed out a victory in the last minute and explained how he felt about the senior class playing in its final home game.

[quote]“We’ve only lost one home conference match in their four years here, that says a lot about who they are as a class,” Friesen said. “To be quite frank, how this game went a little bit says a lot about their personality too … they like to make things tight sometimes.”[/quote]

SDSU improved to 6-1 after this match and remain No.1 in the Mountain West Conference. Without any more home games left, SDSU will play its final conference games beginning with Boise State University on Friday, Oct. 25.