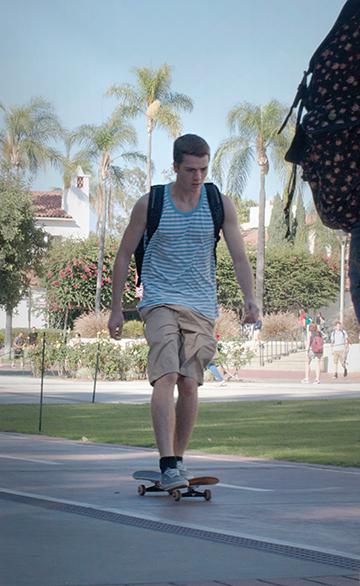 Nine accidents involving motorless vehicles resulting in traumatic injuries have been reported from the beginning of the semester through Oct. 21. Eight of those involved skateboards. These numbers don’t account for the numerous incidents that have gone unreported.

According to San Diego State interim Chief of Police Lamine Secka, riding skateboards is illegal on campus. However, many students refuse to recognize this law, resulting in accidents and unnecessary confrontation with campus police, Secka said.

Some students, such as teaching-credential student Mariana Lara, feel unsafe on campus because they constantly worry about a skateboarder hitting them. Lara said she always looks both ways, but still doesn’t feel at ease.

“There needs to be something that enforces the rule of ‘no skateboarding,’” Lara said.

The bike lane was established two years ago. SDSU Associated Students put up a banner to advertise that no skateboards were allowed, Secka said.  The banner was stolen within days of its placement on Love Library’s exterior.

Mechanical engineering senior Adnan Ansar was involved in an accident about a month ago that caused him to suffer a severed artery in his arm. He was riding at night near the Chapultepec Residence Hall on campus when he hit a pothole, fell and landed on broken glass. However, incidents like this aren’t typical; most result in head injury.

Ansar said despite his accident, he still thinks skateboarding should be legal on campus.

“I think it is ridiculous that other forms of transportation are legal on campus, but skateboarding is illegal,” Ansar said.

Past efforts proposing to A.S. that skateboards be permitted on campus have been turned down.

According to San Diego’s municipal code, skateboards are not to be ridden on sidewalks, which is what primarily makes up SDSU’s walkways.

“(Riding) outside of the bike lane is unsafe,” Brahy said. “It’s bothersome. They get in the way, I get in the way; I just try to avoid them.”

SDSU police officers usually give warnings and do not cite a skateboarder right away, but sometimes riders become confrontational.

“We are trying to promote green alternate modes of transportation,” Secka said. “Riding a skateboard is a low priority crime but it escalates.”

The University Senate approved a new policy last year that has yet to be approved by President Elliot Hirshman because it interferes with the “working conditions for campus staff,” University Senate Chair Bill Eadie said. The policy will be brought to the California State University Chancellor’s Office.

Currently, the University Senate policy states that “skateboards, roller skates, bicycles, and similar personal wheeled conveyances may only be operated on streets and designated paths.” However, there are no designated paths for skateboards on campus.